A monthlong “Tip Your Cap” campaign hon- oring the formation 100 years ago of baseball’s Negro Leagues got underway June 29.

The “Tip Your Cap” campaign, directed by Bob Kendrick, president of the Negro Leagues Baseball Museum located in Kansas City, Mo., is designed to bring recognition and respect to the enormously talented and courageous men and women who played in the Negro Leagues from 1920 through 1960.

The campaign was conceived when long-planned centennial events in major league stadiums across the country were canceled due to COVID-19.

Between now and July 23, people are asked to submit a brief video or photo of themselves tipping their cap in honor of these sports and civil right heroes.

Send the photos or videos to photos@tippingyourcap.com or post on social platforms with the hashtag #tipyourcap2020.

Former Presidents Barack Obama, Bill Clinton, George W. Bush and Jimmy Carter are among those lending their voices to this 100th anniversary milestone.

Also at the forefront of the celebration is Hall of Famer Hank Aaron and Rachel Robin- son, the widow of trailblazing Jackie Robinson, who became the first African-American to break Major League Baseball’s color line in 1947 to play for the Brooklyn Dodgers.

In a statement to the media, President Obama said, “Today I’m tipping my hat to everyone in the Negro Leagues who left a century-long legacy of talent, spirit and dignity in our country. So here’s to Satchel Paige, Josh Gibson, Cool

Papa Bell and everybody else, including three brave women who did us all proud.”

President Bush stated, “When I was a kid, my favorite player was Willie Mays. I can just imagine what baseball would have been like had the predecessors to Willie Mays been able to play Major League Baseball.”

In mentioning Banks, a former player with the Chicago Cubs, the former president tipped his hat to the Chicago icon.

President Carter stated: “I’ve been a baseball fan all my life and the Negro Leagues are an important part of the sport’s history. I am thankful that the era of segregated leagues is long over, and I tip my cap to the pioneers who showed the world that Black players belong in America’s game.” 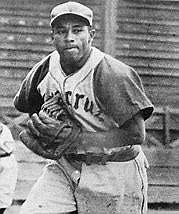 Richmond made a major contribution to baseball’s Negro Leagues.

Ray Dandridge, who grew up in Richmond’s East End, was named to the Baseball Hall of Fame in 1987 by the Veterans Committee.

He broke into the Negro Leagues in 1933 with the Detroit Stars and played for such other teams as the Nashville Elite Giants, the Newark Dodgers and the New York Cubans.

A three-time Negro League All-Star, Dandridge posted a career .355 average and is considered among the greatest defensive third basemen of all time.

He was already 34 and past his athletic prime by the time African-Americans were allowed to play in the previously all-white big leagues.