Death of George Floyd in Minneapolis prompts plans for reform by Mayor Stoney and Gov. Northam, including removal of Confederate statues on Monument Avenue 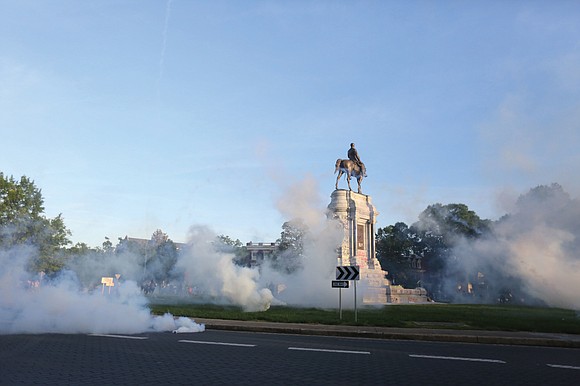 Tear gas clouds the air around the Monument Avenue statue of Confederate Gen. Robert E. Lee on Monday evening when Richmond Police scattered hundreds of peaceful protesters by releasing tear gas and shooting pepper spray about 30 minutes before the 8 p.m. curfew was to go into effect. The Confederate statues are headed for removal under plans announced Wednesday. Photo by Regina H. Boone

The statues of Confederate traitors are headed for removal from Monument Avenue — ending their long reign as white supremacist icons of Richmond that extends back to 1890.

The removals now in the works appear to be the first of the reforms to grow out of the seething unrest over racism and police brutality that has led to days of protests in Richmond and other cities.

The Free Press learned that Gov. Ralph S. Northam is to announce Thursday that the statue of Confederate Gen. Robert E. Lee will removed from its pedestal — now filled with spray-painted tags — and placed in safekeeping.

Separately, Mayor Levar M. Stoney announced Wednesday that he will join 9th District City Councilman Michael J. Jones to introduce legislation to remove the four other Confederate statues on Monument Avenue. Dr. Jones has been the leading advocate on City Council for removing the statues.

The mayor stated that the statue removal legislation, the first of several reform initiatives he plans to undertake, is to be introduced on July 1, the same day a new state law goes into effect allowing localities to take down statues of those who broke with the United States in the 1860s to create a separate nation to perpetually enslave black people..

Based on the work of a commission he formed in July 2017, the mayor previously supported only the removal of the Jefferson Davis statue and urged creation of contextual signage for the others.

However, in a statement released Wednesday, Mayor Stoney said that “times have changed, and removing those statues will allow the healing process to begin for many black Richmonders and Virginians. Richmond is no longer the Capital of the Confederacy — it is filled with diversity and love for all — and we need to demonstrate that.” 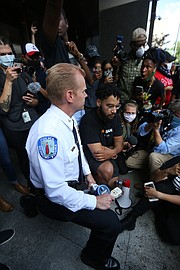 Police Chief Will smith takes a knee at a joint press conference with Mayor Levar M. stoney on Tuesday outside City Hall where they apologized to the crowd for police using tear gas and pepper spray on a peaceful crowd on Monday night at the Lee statue.

He noted that the change goes along with demands of protesters who during recent days have ensured the monument pedestals were “thoroughly spray-painted” and used them as launching pads for street marches demanding change.

The announcement of reforms aimed at what the mayor said would improve equity and change policy, were issued a day after Mayor Stoney and Police Chief Will Smith faced a raucous crowd of protesters to apologize for police tear-gassing people on Monday night.

Among the key reforms the mayor announced that he is backing:

• Enacting the Marcus Alert, named for 24-year-old Marcus-David Peters, a naked and unarmed public schoolteacher who was fatally shot when he charged a Richmond Police officer in May 2018 while experiencing a mental health crisis. The alert program that Chief Smith supports would allow city officers to bring in a mental health professional from the Richmond Behavioral Health Authority to help de-escalate such situations. The family of Mr. Peters has been advocating for such a policy since his death.

• Taking steps to ensure racial equity is a core component of the city government’s policies and practices, a proposal 6th District Councilwoman Ellen F. Robertson put forward. Among other things, the initiative would include racial equity training for staff, departmental action plans and a study to provide a roadmap to improve inclusion and equity in city government, according to the mayor’s statement.

On Monday night, up to 5,000 people gathered at the Lee statue to continue their calls for justice and change in the wake of the Memorial Day killing of George Floyd, a 46-year-old unarmed man who was placed on his stomach, hands cuffed behind his back, in a Minneapolis street by a white police officer who kept his knee on Mr. Floyd’s neck for nearly 9 minutes.

Despite the protest being peaceful and at least 30 minutes left before an 8 p.m. curfew went into effect, Richmond Police officers without warning began firing tear gas into the crowd and pepper spraying those who did not disperse.

Adding insult to injury, the Richmond Police initially released a statement to justify the action that turned out to be false. That statement claimed that some officers engaged with violent protesters and were separated from the rest of the police force and the gassing was aimed at halting any conflict — a statement that people present told the Free Press had no basis in fact.

Just a few hours later, Chief Smith acknowledged that officers who had fired the tear gas had taken action in violation of department policy and would face discipline.

Mayor Stoney apologized in a tweet and also urged those affected by the tear gas and pepper spray to come to City Hall on Tuesday so he could personally apologize.

Facing a crowd of up to 1,600 people that sprawled across Marshall Street into the plaza of the city Social Services building, the mayor sought to apologize on Tuesday, though he was often shouted down by the crowd.

Mayor Stoney gives a fist-bump to a protester in the crowd Tuesday evening after walking with the throng from the state Capitol to the Lee statue on Monument Avenue.

“It should not have happened,” Mayor Stoney told the crowd, adding that as a 39-year-old black man, he feels the same pain many do from Mr. Floyd’s death. The mayor said the city and its police department violated its contract with protesters — that if they kept the demonstrations peaceful, the police would not intervene or disrupt the event.

“We violated that contract,” he said.

Mayor Stoney was moved when 8-year-old Raigen Tucker, who was among those tear-gassed, was lifted on shoulders and told the mayor, “I’m scared.” Raigen’s mother, Latisha Carson, added that her daughter is afraid police are “going to shoot tear gas at us.”

While little was settled, the mayor ended up walking Tuesday evening with protesters from the State Capital to the Lee monument. He was joined by Councilman Jones and Henrico Delegate Lamont Bagby, chair of the Virginia Legislative Black Caucus.

Lt. Gov. Justin E. Fairfax also participated, as did Richmond state Sens. Ghazala F. Hashmi and Jennifer L. McClellan, who all stayed after the mayor left to a chorus of boos before the 8 p.m. curfew went into effect.

Mayor Stoney used the moment to begin outlining the reforms on Wednesday.

“Yesterday, I marched with Richmond for Richmond,” the mayor stated in the release. “George Floyd’s death may have happened in Minneapolis, but the shockwaves are bringing very valid pain to the surface in our city.

“Last night,” he continued, “Richmond told me to channel our city’s pain into reform. We have so much work to do to build an equitable city. That entails reforms to address racist systems, combating this public health crisis, addressing health inequities, and remaining committed to my administration’s priorities to lift people up, including affordable housing, strong public education systems, economic empowerment and fast and reliable public transportation.”