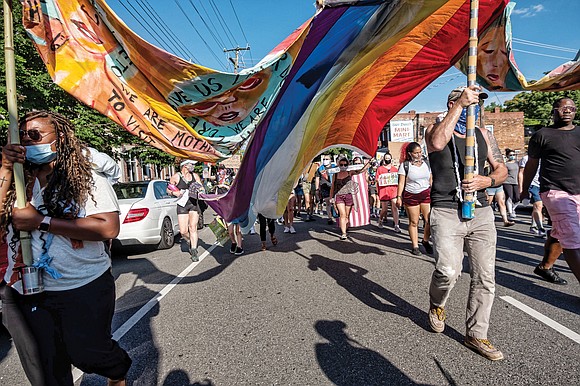 Hundreds of demonstrators march in support of Black Lives Matter and Richmond’s LGBTQ+ community on June 12, the four-year anniversary of the deadly Pulse nightclub rampage in Orlando, Fla., where 49 people were killed. Photo by Sandra Sellars

In most states, it remains legal to discriminate against gay and transgender people in housing and public accommodations, leading activists noted. And they decried continuing violence and discrimination directed at transgender Americans, notably trans women of color.

“This is a landmark victory for legal equality, but unfortunately we have a lot of work still to do,” Alphonso David, president of the Human Rights Campaign, a national LGBT-rights organization, said of the high court’s ruling on Monday.

The Supreme Court decided 6-3 that the federal Civil Rights Act of 1964 — by prohibiting workplace sex discrimination — protects gay, lesbian and transgender people from dis- crimination in employment. The opinion was written by Justice Neil Gorsuch, one of President Trump’s two appointees to the court.

Even with the high court ruling, Mr. David said there’s a pressing need for enactment of the federal Equality Act, passed by the U.S. House of Representatives last year but stalled in the U.S. Senate. It would extend to all 50 states the comprehensive anti-bias protections already provided to LGBT people in 21 mostly Democratic-governed states — addressing such sectors as housing, public accommodations and public ser- vices. (The Virginia General Assembly passed such a law earlier this year that was signed by Gov. Ralph S. Northam, called the Virginia Values Act, which goes into effect July 1.)

That goal will be difficult to accomplish, Mr. David said, unless President Trump is defeated in the November election and Democrats end Republican control of the Senate.

“There are important contexts where sex discrimination is still legal under federal law: Businesses open to the public and recipients of federal grants, like soup kitchens and drug treat- ment programs,” he said.

“The Equality Act would plug those holes,” he added. “It would also update the range of businesses covered under the federal civil rights law so that forms of discrimination like racial profiling in stores and by ride-sharing services become illegal.“

“This validates the rulings of four federal district courts that the military ban is impermissible sex discrimination,” said Mr. Minter, who is legal director for the National Center for Lesbian Rights.

Mr. Minter also depicted the court ruling as “an extremely forceful rebuke” to the administration’s efforts to justify strip- ping away health care protections for LGBT people under the Affordable Care Act.

Courts also are dealing with cases about transgender students’ access to school bathrooms and locker rooms.