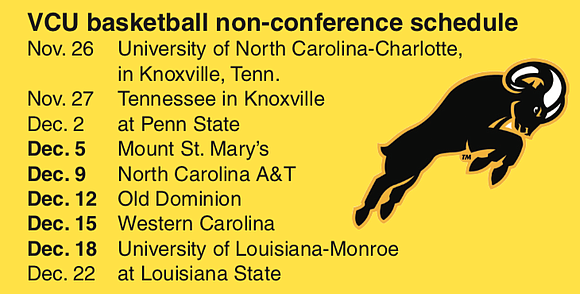 In his fourth season, Rams Coach Mike Rhoades and the team will travel to Knoxville, Tenn., to play the University of North Carolina -Charlotte 49ers on Thursday, Nov. 26, followed by a game against the host University of Tennessee Volunteers on Friday, Nov. 27.

Charlotte is a member of Conference USA while Tennessee competes in the SEC.

The Rams’ non-conference slate will end Dec. 22 with a game at Louisiana State University in Baton Rouge. The LSU Tigers, part of the SEC, are coached by former VCU Coach Will Wade.

Charlotte was 16-13 last season under Coach Ron Sanchez, who served as an assistant at the University of Virginia under Coach Tony Bennett from 2009 to 2018.

Tennessee was 17-14 last season under Coach Rick Barnes. The Vols defeated VCU 72-69 in a November 2019 tournament at Niceville, Fla.

Coach Barnes was fired by the University of Texas in 2015 to make way for the arrival of former VCU Coach Shaka Smart.