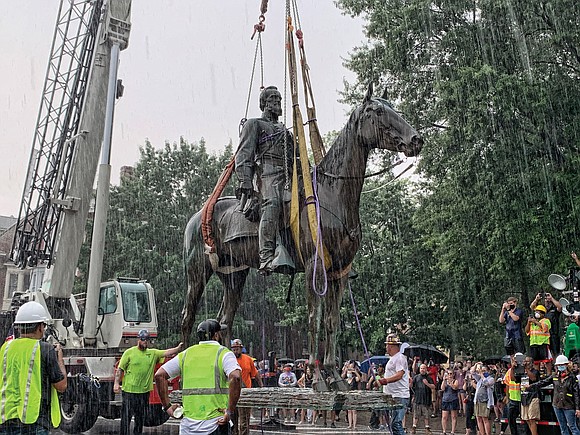 After more than 100 years, the statue of Confederate Stonewall Jackson on Monument Avenue came down to the cheers of throngs of people July 1 shortly after Mayor Stoney’s emergency order for the racist symbols to be removed. Photo by Sandra Sellars

Devon Henry paced in nervous anticipation because this was a project like nothing he’d ever done. He wore the usual hard hat — and a bulletproof vest.

An accomplished Black businessman, Mr. Henry took on a job the city says others were unwilling to do: Lead contractor for the now-completed removal of 14 pieces of Confederate statuary that dotted Virginia’s capital city. There was angry opposition and fear for the safety of all involved.

But on July 1 when a crane finally plucked the equestrian statue of Gen. Stonewall Jackson off the enormous pedestal where it had towered over this former capital of the Confederacy for more than a century, church bells chimed, thunder clapped and the crowd erupted in cheers.

Mr. Henry’s brother grabbed him, and they jumped up and down. He saw others crying in the pouring rain.

“You did it, man,” said Rodney Henry.

Success came at some cost. Mr. Henry faced death threats, questions about the prices he charged, allegations of cronyism over past political donations to the city’s mayor and an inquiry by a special prosecutor. But he has no regrets.

“I feel a great deal of conviction in what we did and how it was done,” Mr. Henry, 43, told The Associated Press in the only interview he has given.

As recently as a few years ago, the removal of Richmond’s Confederate monuments seemed nearly impossible, even as other tributes to rebel leaders around the United States started falling.

It was a particularly charged issue in a historic city that had served as the capital of the Confederacy and played a central role in the Civil War. And the statues, especially along historic Monument Avenue, were breathtaking in size and valued for their artistic quality, drawing visitors like Winston Churchill and Dwight Eisenhower.

The tide turned after the May 25 death of George Floyd in Minneapolis at the hands of police, which ignited a wave of Confederate monument removals. Richmond Mayor Levar M. Stoney and City Council committed to removing the statues, something the Democrat-led General Assembly had authorized earlier in the year by giving localities control over their statues beginning July 1.

Mayor Stoney, who is Black and also has faced backlash for his role in the monument removals, including racist and threatening voicemails, said in a debate in early October that “what we invasive species removal to crane services for the U.S. Army to general construction. Team Henry was the general contractor on the recently completed Memorial to Enslaved Laborers at the University of Virginia.

Mr. Henry serves on several boards, including those of a bank and a health system foundation, and is a member of the board of visitors at his alma mater, Norfolk State University, where he endowed a scholarship.

Mr. Henry said the city’s Department of Public Works asked him in mid-June if he would be interested in the statue project. A contractor who turned the city down gave them his name, he said.

Mr. Henry huddled with his family to make sure everyone was on board. His son and daughter “started Googling” and “there was most definitely a level of concern” when they read about what happened in Charlottesville, where plans to remove a Robert E. Lee statue sparked a deadly white supremacist rally in 2017, and in New Orleans, where a contractor’s car was firebombed.

Ultimately, they all agreed to take the job. This was an opportunity to be a part of history.

For safety, Mr. Henry said, he sought to conceal his company’s identity, creating a shell entity, NAH LLC, through which the $1.8 million contract was funneled.

Mayor Stoney’s administration initially declined to say who was behind the company, but the arrangement eventually came to light through public records requests and reporting by local news outlets. One blog ran a story headlined, “The Gory Details of Levar Stoney’s Statue Contract.” It also was reported that Mr. Henry had donated a total of $4,000 to Mayor Stoney and his political action committee.

Since his name and company became public, Mr. Henry said he has received death threats. He has added extra cameras to both his home and office security systems, gotten a concealed carry permit, taken defensive shooting classes and now carries a weapon wherever he goes.

He said he also has faced business repercussions. Some subcontractors have declined to work with him, he said, or doubled their prices.

An ongoing inquiry by a special prosecutor into the contract was initiated after Richmond City Councilwoman Kimberly B. “Kim” Gray, who formerly opposed removing the monuments and is running against Mayor Stoney in the November mayoral election, raised concerns about the deal.

Some of the mayor’s critics have questioned whether the price tag for the project, which included the removal of both large figures and smaller plaques, was reasonable. The statues are gone, but their enormous pedestals remain in place.

Some U.S. cities have paid more, like New Orleans, where it cost more than $2.1 million to remove four monuments. Others, like Baltimore, have paid far less. That city paid under $20,000 for four statues, according to one newspaper report.

Andrew Baxter, a nationally known conservator of outdoor sculpture who has worked on projects at the White House and the National Gallery of Art and has conducted extensive restoration work in the past on several of Richmond’s largest Confederate monuments, was critical of the mayor’s handling of the situation. Mayor Stoney acted without the City Council’s formal sign-off and before completing procedural steps in the new law.

“It’s not a situation where you’re just putting in a crane on the street and you’re putting an air conditioner on top of a unit,” he said.

There was trouble finding subcontractors. Even a company he worked with on the U.Va. memorial gave him a resounding, “Hell no!” when asked to participate, Mr. Henry said. A repre- sentative of another company suggested he should go take down a statue of Martin Luther King Jr. Truckers involved didn’t want their vehicle logos showing. Workers ended up traveling into Richmond from Wisconsin and Connecticut.

Mr. Henry negotiated the security plans, eventually working with the Richmond Sheriff’s Department because he said the police department was not willing to participate.

In the end, the project went on without incident.

In an interview a block away from the pedestal that once held Confederate Gen. J.E.B. Stuart’s statue, Mr. Henry mused about his participation in two very different projects reflecting this moment in the story of race and America.

He helped build the U.Va. memorial, two nested granite rings, one with a timeline of the history of slavery at the school — a tribute to the enslaved people who built and maintained one of the country’s most prestigious public universities but had long gone unrecognized.

And he helped remove the Richmond statues, which he called tools of oppression against Black Americans.

“To be a Black man in the middle to do it, it felt pretty good,” he said.