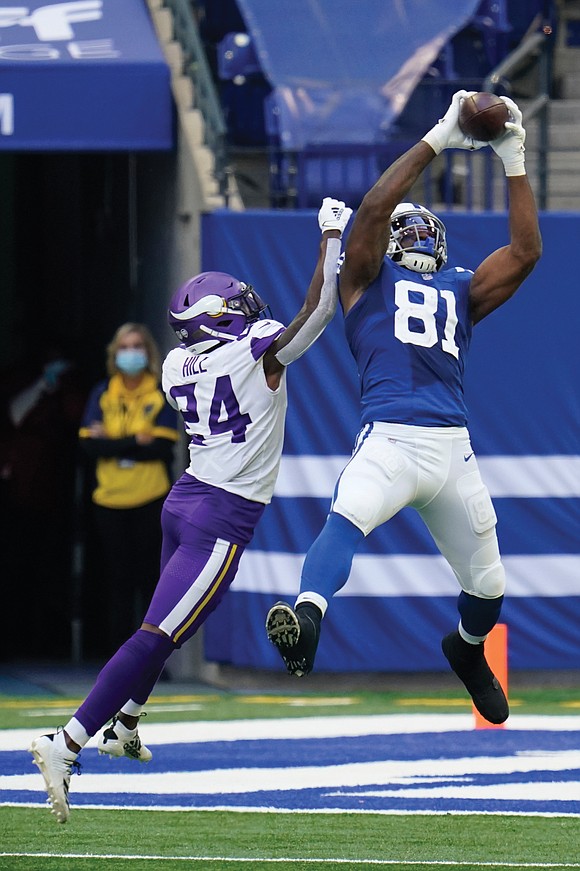 Indianapolis Colts tight end Mo Alie-Cox (81) makes a catch Sunday against the Minnesota Vikings’ Holton Hill (24) during the second half of their game in Indianapolis. Photo by AP Photo/Michael Conroy

Mo Alie-Cox has some of the largest hands in the NFL and, last Sunday, he showed them off.

The former Virginia Commonwealth University basketball standout had five receptions for 111 yards to help the Indianapolis Colts to a 28-11 victory over the Minnesota Vikings.

His longest play went for 33 yards.

It was by far Alie-Cox’s best ever game.

The 6-foot-5 native of Northern Virginia had not played football since his freshman year in high school before joining the Colts as a free agent in October 2017.

Alie-Cox, whose hands stretch 11 3⁄4 inches from the tip of his thumb to the tip of his pinkie, is in his third NFL season after an outstanding basketball career at VCU.

The former Ram had two catches for 20 yards in the Colts’ opening loss at Jacksonville the week before.