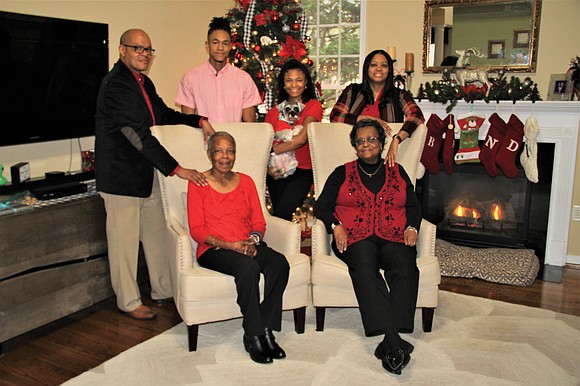 During the past 19 months, three generations of the Lewis family have experienced what many families fear – infection with the COVID-19 virus and cancer.

At the center of the family is Nickkol Lewis, 49, a graphic designer who has her own company, Visual Appeal. Her mother, Deborah Joseph, was diagnosed with an aggressive form of breast cancer in February 2020 and had to undergo months of chemotherapy just as the pandemic was starting. Mrs. Lewis’ daughter, Amber, a nursing student, contracted COVID19 in December 2020, just as the first vaccine against the potentially fatal virus was being rolled out.

“The situation was hard, very hard,” Mrs. Lewis recalled in a recent interview with the Free Press from their home in Mechanicsville that is shared by three generations.

What got them through?

The love and support of family.

Mrs. Joseph, 68, had been living with her daughter and granddaughter ever since Mrs. Lewis’ husband, Jezmon Lewis, 50, a major in the Army Reserve, had been deployed to the Middle East about 10 years ago.

After her cancer diagnosis, she began a regimen of chemotherapy that continued through early 2021. Adding to the stress and uncertainty of the situation, Mrs. Joseph also underwent emergency gallbladder in fall 2020. But with COVID-19 raging, Mrs. Joseph couldn’t stay nor did she want to stay – in the hospital.

She was released back home, where Mrs. Lewis and her daughter took over caregiving duties.

“Everything that could have been done for me as I recovered was done,” Mrs. Joseph said, adding her gratitude for her daughter being there for her every step of the way.

Mrs. Lewis connected with resources to get extensive medical information about her mother’s breast cancer. With that information, she and her mother decided Mrs. Joseph would have a procedure to remove the cancerous tissue, followed by chemotherapy.

“We dealt with the residual effects of the procedure after my mom came home,” Mrs. Lewis recounted. Her mother, she said, doesn’t react well to medication, and at times needed actual physical support because of weakness.

That’s when Mr. Lewis’mother, Deborah Miller, 71, of Newport News, stayed with the family for two weeks to help out.

During this time, much of the city and the nation – was in lockdown from the pandemic. Mrs. Lewis was still trying to maintain her graphic design business while ensuring her mother got to doctor appointments safely.

“In my heart, I knew my mother would be fine because she is solidly grounded in her faith,” Mrs. Lewis said.

The family pulled together. Mr. Lewis, an Army specialist, was living in Maryland during the week and commuting back to Richmond on the weekends. The Lewises’ 25-year-old son, Brandon, a computer specialist who frequently travels for work, was living in Fredericksburg and could get home only occasionally.

“However, I gave everyone a role,” Mrs. Lewis said.

Amber, 23, a nursing student at ECPI, was the family medical assistant and researcher. She checked her grandmother’s vital signs daily and made sure her medication was taken on time.

Mr. Lewis and Brandon were coaches, connecting and encouraging daily by phone. Mr. Lewis made sure his wife heard his voice the first thing every morning and the last thing every night.

“The hardest thing for me to hear was my wife’s emotions while I was not physically there to support her,” Mr. Lewis said. “I would talk her through whatever she was going through at the time.”

Brandon also touched base with each family member regularly.

“It was rough. I just wanted to be in Richmond with my family,” Brandon said. “Although I was far away, I rekindled my family connection, especially with my sister.”

In the midst of everything, the unthinkable happened. Just after Christmas, Amber found out she had COVID-19. While she had been taking her nursing classes virtually from home, she attended a Christmas party at a relative’s home. Everyone wore masks, she said, and the doors in the house had been opened to increase air circulation.

But the weekend after the party, Mrs. Lewis noticed that Amber couldn’t smell bacon that was cooking. Nor could she taste it.

Amber immediately quarantined herself in her bedroom to prevent spreading the virus to family members, particularly her grandmother, whose immune system was compromised with the cancer and chemotherapy.

The tricky part of sharing the home, however, was that Amber shared a bathroom with her grandmother. Mrs. Lewis said that touched off a cleaning frenzy during Amber’s days in quarantine.

“I made sure every time I used the bathroom, I disinfected everything sometimes twice,” Amber said. “I made sure my grandmother did not get infected. I stayed away from everyone. I stayed held up in my room, keeping my door closed, for more than two weeks.”

This Christmas, the Lewis family is breathing a little easier, with no medical situations or emergencies looming. All family members are fully vaccinated against COVID-19 — and they have their booster shots — as they come together to celebrate the season and return to some long-held family traditions. They plan on all being together at home, enjoying favorite foods and holiday beverages, playing games and singing karaoke on Christmas Eve. Then at the stroke of midnight, they will exchange gifts and celebrate the birth of Christ, as well as Mrs. Lewis’ birthday.

The family has been through a lot during the past year, said Mr. Lewis’ mother, Mrs. Miller. And they have all become closer because of it, she added.

“Christmas should bring people closer together,” Mrs. Miller continued. “It’s not just about buying presents and gifts. It’s about being together. We all need to stick together with our families.”