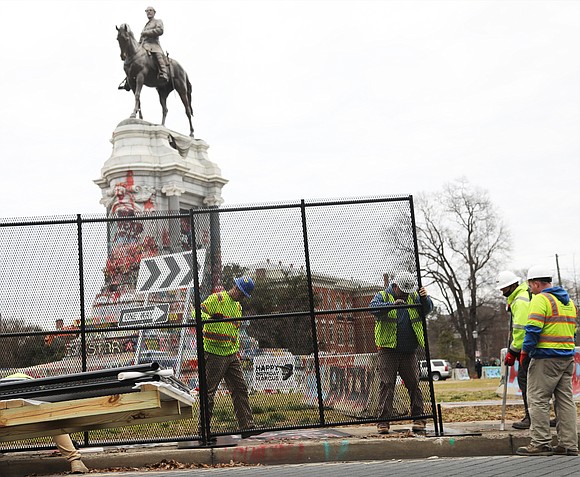 On Monday, the same day that state workers began installing fencing around the statue of Confederate Gen. Robert E. Lee on Monument Avenue in Richmond, a few landowners trying to prevent the statue’s removal filed their long-awaited appeal with the Virginia Supreme Court.

The appeal filed by attorneys Patrick M. McSweeney and Fred D. Taylor recites the familiar claims that were rejected in Richmond Circuit Court – that the property owners near the statue have an easement that allows them to prevent removal of the statue and that their rights deserve to be upheld.

The state’s highest court has not yet scheduled a hearing on the appeal, which could take several months.

However, in December, the state Supreme Court kept the statue in place when it refused a request from Attorney General Mark R. Herring to dissolve an injunction imposed by Richmond Circuit Court Judge W. Reilly Marchant.

While Judge Marchant ruled that Gov. Northam can take down the statue, he also imposed the restraining order to prevent the state from removing the statue during the appeal process.

Meanwhile, workers from the state Department of General Services installed fencing around the Lee monument grounds. Officials said the action was to “prepare the site for removal of the statue” and to be prepared “to act quickly” once a decision is handed down by the court.

“The fencing is not intended to be permanent,” a DGS news release stated.

Crews removed “abandoned personal items” from the grassy site around the statue, with the department noting that all memorials on the grounds would remain until the statue is removed. The memorials, including those to Marcus-David Peters, the 24-year-old high school biology teacher who was shot and killed by a Richmond Police officer in May 2018 as he was experiencing what has been described as a mental health crisis, are to be removed then and stored “until a decision is made as to their disposition,” according to state DGS officials.

During the social justice demonstrations last spring, advocates dubbed the grassy circle around the Lee monument “Marcus-David Peters Circle” and installed a formal sign in the space.