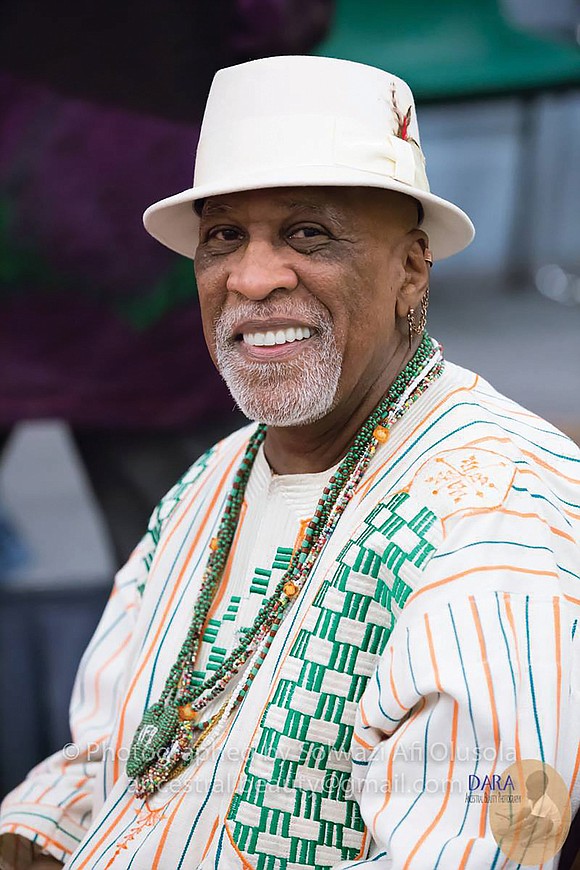 From Alexandria to Richmond to Vietnam and Harlem, Ngoma Hill has built an impressive artistic career. He is now being recognized for his work on another level.

The award, by the National Beat Poetry Foundation, is the latest honor for an artist whose work has been going strong for decades.

“I was elated,” Mr. Hill says of learning that he would receive the title. “I’m honored to be recognized.”

Mr. Hill, who previously served as New York State National Beat Poet Laureate from 2017 to 2019, describes himself as a “modern day griot and multi-instrumentalist.”

Mr. Hill composed his first poem while serving as an infantryman in Vietnam, inspired by books sent to him by his friends. In the years since, he has expanded his art through the additional use of music and song.

Following the traditions of West African griots, Mr. Hill uses his skill with a wide variety of musical instruments to accentuate his poetry. From the violin and bamboo flute, to the yidaki and guitar, all allow him to encompass a wide genre of music with a focus on raising “social, political and spiritual consciousness” through commentary. His topics range from social and environmental justice to voting rights, nuclear disarmament and economic inequities.

“I seek to inspire the oppressed and those who struggle for a better life and seek an introduction and understanding of alternative viewpoints,” Mr. Hill says.

During the span of five decades, Mr. Hill has presented his work in many venues and with talented collaborators, including as part of Amiri Baraka’s The Spirit House Movers and Players and Serious Bizness.

Mr. Hill’s work also has been shared in public and private schools, colleges and universities and at multiple social justice rallies, most notably the largest anti-nuclear rally in Central Park in June 1982. He has served as an artistic curator in the past, and has been initiated as Priest of Obatala and a Priest of Ifa.

Mr. Hill sees poetry as a means to help those in difficult times by encouraging an approach to different perspectives and critical thinking. Mr. Hill himself strives to do the same, and sees his time in Richmond as one that has inspired him to expand his perspective when it comes to artistic expression.

With a poetic memoir to be published in the near future, Mr. Hill continues to look for new ways to push himself creatively and inspire positive growth and change in the world around him.

“The main inspiration behind my work is the human condition,” says Mr. Hill. “I write to raise social, political and spiritual consciousness.”

Meet a poet and crusader who inspires through his art, and this week’s Personality, Ngoma Hill:

Date and place of birth: July 18 in Alexandria.

Where I live now: Harlem, N.Y.

Family: I’m recently remarried. I have a daughter and three grandchildren who live in Texas.

How I learned I was selected: By email. I was elated. I was New York State National Beat Poet Laureate USA 2017 to 2019.

National Beat Poetry Foundation is: A Connecticut-based, not-for-profit organization, which includes festivals, the National Beat Poetry Festival, the International Beat Poetry Festival and Kerouac Cafe. While the foundation continues to preserve the writings of the “Beat Generation,” it strives to keep evolving to create a new “Beat Generation” of poets, writers, artists and musicians. The NBPF supports the mission by hosting, collaborating and fostering joint partnerships for Beat-themed poetry readings, workshops, plays, radio shows and much more across the United States and worldwide.

Poetry is: From an African perspective, a cultural, spiritual and political way of expression.

First poem written and why: I wrote my first poem while I was an infantryman in Vietnam. My friends, some who went to Virginia Union University, sent me books that fed my consciousness. My first poem was an expression of my development as an artist.

The main inspiration behind my literary work: Is the human condition. I write to raise social, political and spiritual consciousness.

Themes covered in my poetry: I am a modern day griot and multi-instrumentalist who practices his art through the use of poetry, song and music. My work is specifically crafted to raise social, political and spiritual consciousness through social critique and commentary using these artistic mediums. I create and use music that invokes the richness of our history as a reference point. I accomplish this through the use of slave, work freedom, jazz, blues, traditional African spiritual and folk songs. My obsession and love of music has led me to play several instruments — violin, bamboo flute, yidaki (erroneously called the didgeridoo), guitar and assorted percussion instruments that, in West African griot tradition, provide an engaging platform for my original poems. I continue faithfully in this tradition by addressing a myriad of topics that include social and environmental justice, women’s rights, peace and nuclear disarmament, prisoners’ rights, voting rights and economic inequities. I connect the dots to show how these entities are connected.

How poetry can help people during difficult times: By engendering different perspec- tives while invoking the critical thought process.

Who I seek to inspire with my poetry: The oppressed and those who struggle for a better life and seek an introduction and understanding of alternative viewpoints.

How growing up in Richmond inspired me: To seek out and explore different artistic expressions.

Where Richmonders will be able to engage with my work and me: Ngoma Hill and Ngoma Not Your Average String Thing on Facebook, baba_ngoma on Instagram. Also on YouTube.

A perfect day for me is: Any day I wake up.

Quote that I am inspired by: “Sometimes it takes a long time to sound like yourself.” — Miles Davis.

My friends describe me as: I don’t know. I’ve never really asked them.

At the top of my “to-do” list: Make each day count.

Best thing my parents ever taught me: To always strive to be better, better, best.

Person who influenced me the most: Herman A. Hill, my father. He influenced me the most based by his work ethic. He was also one of the plaintiffs in the Brown v. Board of Education lawsuit in Virginia. I was also inspired by Joseph Kennedy, the band director at Maggie L. Walker High School. I also took private violin lessons from him. He was my introduction to jazz violin.

Favorite poet and why: Sorry, I don’t have just one.

Book that influenced me the most: “Black Bourgeoisie” by E. Franklin Frazier. It exposed me to class consciousness based on skin color. I read it when I was in high school. It was pretty advanced reading at the time. Also “The Black Jacobins: Toussaint L’Ouverture and the San Domingo Revolution” by C.L.R. James. It’s the history of the Haitian Revolution and opened me to the idea that we can win.

Next goal: I’m working on a book that should be published in the near future. The title: “I Didn’t Come Here to Tap Dance — A Poetic Memoir.”