Injury-plagued Rams hope to be ready for A-10 Tournament

As this basketball season winds down, Virginia Commonwealth University has become more concerned with X-rays than Xs and Os.

This has been an overachieving VCU season brimming with exclamation points.

However, question marks unfortunately have popped up at an inopportune time as the Rams limped to the regular season finish line. Now comes the Atlantic 10 Conference Tournament.

After winning six straight games and lead- ing the A-10, Coach Mike Rhoades’ injury- jinxed squad lost two of its last three games to slip behind St. Bonaventure, handing the Bonnies the No. 1 seed.

As the No. 2 seed, VCU opens 3:30 p.m. Friday, March 5, at the University of Rich- mond’sRobinsCenteronNBC-SN.TheRams’ quarterfinal opponent will be the survivor of a Thursday preliminary game.

If victorious on Friday, the Rams will advance to the semifinals at 9 p.m. Saturday, March 6 at the Siegel Center.

The championship game will be Sunday, March 14, at the University of Dayton. The game will be broadcast on CBS.

Now about those X-rays and Rx’s.

The top question concerns the health of leading Rams scorer Bones Hyland, who suf- fered a foot injury in the team’s Feb. 10 loss to George Mason University. The sophomore didn’t play in the last two games.

In the season finale loss at Davidson Col- lege, the Rams’ second leading scorer and top rebounder, Vince Williams, twisted his ankle and could not finish the game.

Making it worse, standout guard KeShawn Curry has missed the past three games while attending to family matters in his hometown of Jacksonville, Fla. His brother was killed.

And on Feb. 4, another talented guard, Tre Clark, was suspended from the team and has since transferred to Tallahassee Community College.

VCU remains hopeful that all the injured Rams will be ready to go by Friday. But how effective they might be won’t be known until the action begins.

HIPAA rules make it difficult to get precise reports on athletes’ injuries. Also, coaches are reluctant to reveal information that could serve as a scouting report for the opposition.

So that’s the negative. But there have been plenty of positives both in terms of wins and statistics.

Statistically, the Rams are first in the A-10 in free throw percentage (76 percent), first in blocked shots (5.4 per game) and first in steals (9.6 per game).

Individually, Hyland is second in scor- ing (19.2 points) and fourth in steals (2.0) and a prime candidate for A-10 Player of the Year.

Williams is another All A-10 candidate. The junior from Ohio averages 11.1 points and 5.2 rebounds while hitting 42 percent from beyond the arc and 80 percent at the foul line.

Additionally, VCU led the A-10 in at- tendance by maxing out at the state-imposed 250 crowd limit.

The A-10 Tournament champion will ad- vance automatically to the NCAAs. Should VCU fall short in the conference, the team still would have a chance to be invited to “The Dance” as an at-large entry.

Because of the pandemic, this year’s NIT has been scaled down from 32 teams to 16 teams. All games will be played in Texas.

VCU is now 37th in NET (out of some 350 teams in the NCAA Division I), the power rankings the NCAA and NIT use to determine selections. NET breaks down teams in terms of quadrants.

Any way you look at it, this has been a feel-good season for the VCU Rams. The Rams have prevailed in style despite losses of five front line seniors from 2019-20.

Also, Marcus Santos-Silva, the leading scorer and rebounder from a year ago, trans- ferred to Texas Tech.

A rebuilding year? No way. If you were to take an X-ray of this season overall, it would receive a standing ovation. 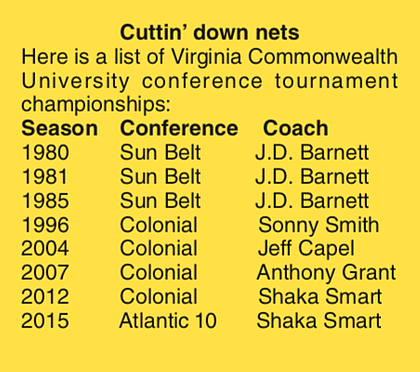