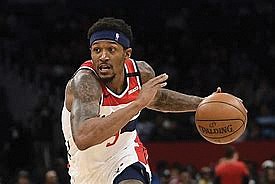 In terms of basketball entertainment, Bradley Beal is the Wizard of Oohs and Ahhs.

The Washington Wizards’ All-Star guard leads the NBA in scoring while being a neon light for a struggling franchise.

If Beal’s lead holds, he will become the first in the Wizards’ franchise history to rank No. 1 in the league in lighting up the scoreboard.

On Jan. 6, Beal tied Gilbert Arenas’ franchise record for points in a game when he poured in 60 against Philadelphia.

It’s fitting the Wizards lost that game. The Wizards began this week with a humbling 12-18 record despite the acquisition of perennial All-Star Russell Westbrook, the 2017 NBA scoring leader with Oklahoma City.

In 23 games for Washington, Westbrook averaged 20 points, 10 rebounds and 10 assists.

Changing landscape: The Wizards franchise traces its roots to Chicago, where the team played as the Packers in 1961-62 and the Zephyrs in 1962-63.

Real Deal Beal: The 6-foot-3 native of St. Louis is no rags to riches story. After one season at the University of Florida, Beal was drafted by The Wiz as the third overall pick in 2012, behind Anthony Davis and Michael Kidd-Gilchrist.

Beal made the NBA’s All-Rookie team in 2012-13 and has been an All-Star each of the past three seasons, sharing D.C. honors with John Wall, who now is with Houston.

With plenty of fuel left in his tank, the 27-year-old ranks second behind Elvin Hayes as the franchise’s career scorer.

On the franchise all-time lists, he ranks first in 3-point connections, fifth in minutes played, sixth in assists and seventh in steals.

Along with his prolific scoring season, Beal averages 5.2 rebounds and 4.7 assists while hitting 48 percent from the floor, 33 percent behind the arc and 90 percent at the foul line.

Late season run? On March 7, Beal will start for the East in the NBA All-Star Game in Atlanta.

And after that? Despite the disappointing start, the Wizards are only 2.5 games behind Charlotte in the Southeast Division.

A healthy combination of Westbrook and Beal at Capital One Arena is very capable of winning a division in which no teams were above .500 starting this week.

Washington hasn’t won the NBA championship since 1978 and hasn’t reached the finals since 1979.

But with a player as gifted as Beal, the team will be too entertaining to ignore, regardless of their record. 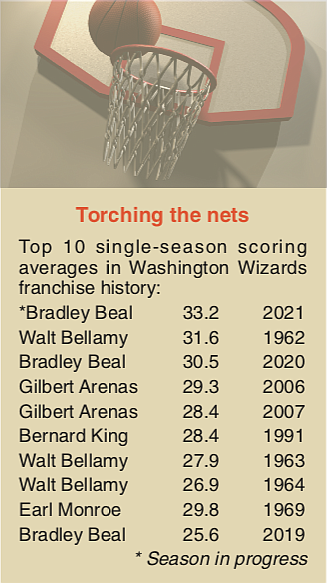