Living a year under COVID

Around Richmond, people mark the first anniversary of life under COVID-19 and look toward what the future may bring 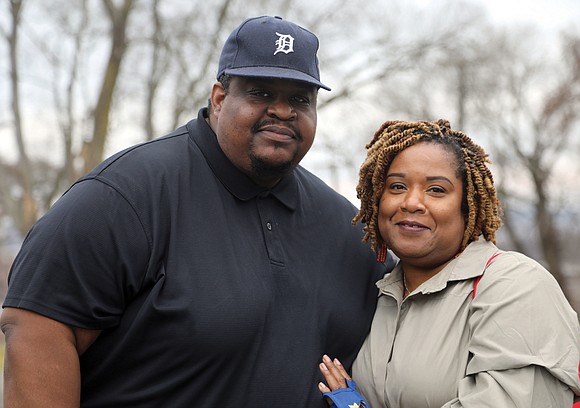 It has been an almost unbelievable 12 months for Monica and Clifton Murray. 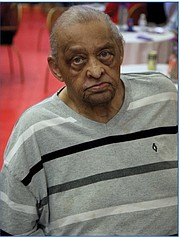 Just as Mr. Murray expressed his reluctance to travel to Detroit for his father’s funeral, his wife, Dr. Murray, principal of John Marshall High School in North Side, had to check her mother, Connie G. Glass, into a local hospital. 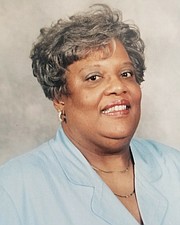 Upon check-in at the hospital, Dr. Murray said she heard a health aide politely say, “Ma’am, you can’t go any further.” She said she realized at that moment she would never see her mother again.

Mrs. Glass died from COVID-19 in October, the day before her 74th birthday.

“Every time we think of this pandemic, immediately our loved ones pop up,” Mr. Murray told the Free Press. “It’s more of a trauma than anything.”

“We began to lean on each other,” Dr. Murray said. “We were able to support each other.” The Murrays’ personal ordeal mirrors the grief and loss experienced by people around Richmond and the nation during a year shattered by COVID-19. More than 598,000 cases of COVID-19 have been reported in Virginia alone since the pandemic began last year, with thousands of people hospitalized and more than 10,100 deaths.

Life as we knew it ground to a halt. Schools, businesses, restaurants and churches were abruptly shut down to help mitigate the spread of the virus. Thousands of people were suddenly out of work as many employers shut their doors, some never to open again.

Hospitals and health care workers were put on high alert. Front line essential work- ers from hospitals and grocery stores to public transportation put their lives on the line daily.

During a year when some have been fortunate to work from home, other families have struggled. Thousands of the estimated 27,000 workers in the Richmond area’s tourist industry lost jobs due to shutdowns and layoffs, said Katherine O’Donnell, executive vice president of Richmond Regional Tourism. Millions of potential dollars were not spent or earned due to the virus, she said.

With unemployment rampant during the past year, mile-long food lines sprang up at area food banks. Families lived in fear of eviction as they struggled to pay the rent or mortgage.

With the rollout of COVID-19 vaccines in late December, nearly 22 percent of Virginia’s population has been inoculated with at least one dose of the vaccine, bringing hope that things may return to normal in the coming 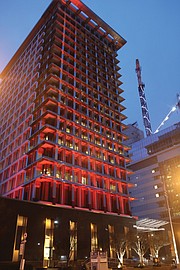 Richmond City Hall was illuminated in “Heartbeat Red” throughout last weekend in remembrance of the more than 200 Richmonders who died during the last year from the coronavirus.

In a COVID-19 Day of Remembrance ceremony last Friday, Mayor Levar M. Stoney paid respect to the 234 Richmonders who have died from the coronavirus during the past year by planting two oak trees at the Powhatan Community Center on Fulton Hill. He called them “symbols of the roots in our community and the rebirth we must embrace.”

Mayor Levar M. Stoney, right, gets a hand from John Harris of the city Department of Parks, Recreation and Community Facilities, in planting an oak tree overlooking the city at the Powhatan Community Center on Fulton Hill last Friday. The tree planting was part of a small, somber ceremony marking COVID-19 Day of Remembrance and the first anniversary of the pandemic.

The Murrays were among the small group of people who participated in the ceremony. Mayor Stoney, who survived his own battle with the virus, noted that many in Richmond have endured heart-breaking experiences during the past year like the Murrays.

At the State Capitol last Friday, Gov. Ralph S. Northam, whose series of aggressive executive orders during the past year have been aimed at stemming the spread of the virus, also held a brief ceremony of remembrance. He noted the Executive Mansion would be illuminated for a week through March 21 “to pay tribute to the thousands” of Virginias lost to COVID-19.

“While so much has changed over the past year, Virginians have continued to show strength and resilience, stepping up during this time of great need,” Gov. Northam said. “We owe it to the victims of this virus and their loved ones to continue doing our part to mitigate the spread of COVID-19 until this pandemic is behind us,” he said.

Gov. Northam also noted the General Assembly passed a resolution declaring March 14, this year and in succeeding ones, as Victims of COVID-19 Remembrance Day in Virginia. The resolution was sponsored by Richmond Delegate Delores L. McQuinn, a COVID-19 survivor.

The governor and his wife also were stricken with the virus in late September and early October and went into isolation in the Executive Mansion.

“The worst thing (stemming from the pandemic) is a number of people have died,” said the Rev. Ben Campbell, pastor emeritus of Richmond Hill.

“The best thing that’s happened is there’s some sense we’re all in this together. We’ve learned we’re all dependent on each other,” he said. “Getting through a trauma requires you to work together.”

The pandemic also has highlighted and heightened social ills that have long plagued the Richmond community — hunger, homelessness, unemployment. It has forced city leaders to recognize the continuing needs, Rev. Campbell said.

“We still have a lot of challenges and unknowns,” said Dr. Melissa Viray, deputy director of the Richmond and Henrico Health District.

She said last year was like “being sprayed with a fire hose.” Health officials were faced initially with trying to figure out what was happening at such an unpredictable and alarming speed around the neighborhood and around the world. Medical advances during the past year with vaccines mean “it’s going to be a lot less difficult” in the next 12 months. “Vaccines are key,” she said.

But, she cautioned, “We still have a lot of unknowns.”

She reinforced the need for people to continue to wear face masks in public, wash their hands frequently with soap and warm water and keep a safe personal distance.