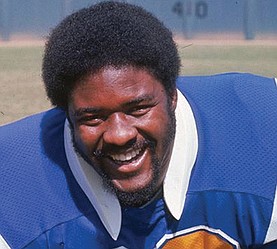 The San Diego Chargers had one of the NFL’s most explosive offenses in the 1970s, and Doug Wilkerson was a key cog in the attack.

Mr. Wilkerson, a three-time Pro Bowl selection and member of the Chargers’ Hall of Fame, died Sunday, Feb. 21, 2021, at age 73 in Encinitas, Calif.

The offense was famously tagged “Air Coryell” (for Coach Don Coryell) and Wilkerson, nicknamed “Moosie,” wore jersey No. 63 and came to be known as “Route 63” for the way he cleared the way.

Mr. Wilkerson helped San Diego to four playoff berths while starting 195 of the 204 games he played.

An alumnus of E.E. Smith High School in Fayetteville, N.C., and North Carolina Central University, Mr. Wilkerson was among the most heralded athletes coming from a CIAA institution or historically Black college or university.

He was the Houston Oilers’ first round draft pick (14th overall) in the 1970 NFL draft. He was soon traded to San Diego.

Mr. Wilkerson was among the first, first round draft picks from an HBCU. Many of the future Hall of Famers of the day were lower round NFL picks. For example,

Coming out of NCCU, Wilkerson was eyed as a “can’t miss” pick and he never disappointed. He was inducted into the Black College Football Hall of Fame in 2014.