Dr. Lillie R. Bennett has been caring for Richmond children in her medical practice for nearly 50 years 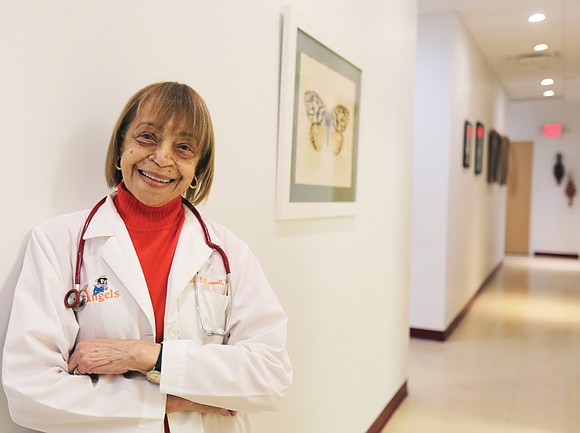 Dr. Lillie R. bennett cares for patients from her Chamberlayne Avenue office in North Side. Photo by Regina H. Boone

For her, the care the children receive from Dr. Lillie Robinson Bennett is worth it.

“I trust her,” Ms. Carter said in explaining why she travels to Dr. Bennett’s Chamberlayne Avenue office in the North Side when she has other options.

For thousands of Richmond mothers and fathers, Dr. Bennett is the physician they want to care for their children’s health. And it’s been that way for the nearly 50 years that Dr. Bennett has been practicing in this city.

She still has a ways to go, though, to match the 73-year record of late Atlanta pediatrician Leila Denmark, who practiced until she was 103.

Dr. Bennett doesn’t tell her age – “I don’t talk age” – but 58 years have passed since her graduation in 1963 from Meharry Medical College in Nashville, Tenn.

As Thanksgiving approaches, Dr. Bennett is grateful for the good health that has enabled her to continue practicing, which she credits to exercise, eating right and “keeping a positive attitude.”

She also is thankful that she has a joint practice with her son, Dr. Richard L. Bennett Jr., who followed her into medicine and sees his young patients at his office on the campus of the Bon Secours-Richmond Community Hospital in the East End.

Dr. Bennett also is grateful for her long-serving staff, four of whom have been with her for decades. Among them are LaVette Branch, 40 years; Gwendolyn Coley, 43 years; Carol Harris, 42 years and Brenda Johnson, 38 years.

While most doctors retire by age 70, Dr. Bennett has no plans to do so. She said that it’s not about money, it’s about the work.

“I love what I am doing,” she said. “And I love each and every child who comes to see me.”

Hundreds of photos of her young patients adorn several walls in her office.

Dr. Bennett said she looks forward to the commute from her Ashland home to the office and the opportunity to interact with 20 to 40 children a day. She said she continues to find the work “deeply rewarding.”

She delights in watching her patients “grow and in helping them and their parents anticipate each stage of development.” She is thrilled when a patient struggling with health issues recovers.

Dr. Bennett works five days a week, seeing patients from 10 a.m. to 6 p.m. on four days, with a shorter day on Wednesdays.

Her schedule is a bit lighter than 20 years ago because she no longer makes hospital visits. Though she has privileges at all of the area hospitals, she said a new breed of physician called hospitalists now take over care when her patients need surgery or other significant in-patient treatment.

She refused, though, to let the pandemic stop her from seeing patients, although she maintained precautions.

An old-school physician who believes in seeing patients in person, she nixed virtual visits or telemedicine, instead requiring all entering her office to be masked and maintain social distancing.

She said she also continues to encourage parents and children to get vaccinated, as she is, but added she had not been given the vaccine to administer at the office.

So far, the strict protocols have worked, she said.

Dr. Bennett said she tries to see each child at least twice a year, and sometimes more often, to monitor treatment and to see how they are faring. She said she treats children even if the adults in their life are behind in payments. “It’s not the children’s fault,” she said.

Online physician rating sites such as Healthgrades, WebMD and U.S. News Health give her high marks, though there are some critics.

Based on responses, those sites award her mostly five stars—the highest rating—for the overall patient experience, the thoroughness of her exams, the amount of time she spends with patients, the follow-up on care, the perceived health outcomes and for her positive attitude and ease of making appointments.

Dr. Harold Green, an internal medicine specialist whose office is located a few doors away, describes Dr. Bennett “as a great doctor who is focused on her patients’ well-being.”

Many of the babies and young people she treats are the children and grandchildren of former patients. That is the case with

Chryshunda Moore, who first came to Dr. Bennett as a newborn and now brings her son.

“No matter what I need for my child to be healthy, she comes through every time,” Ms. Moore said of Dr. Bennett in an enthusiastic review. “My son adores her, and that, to me, speaks volumes.”

Another parent, Lisa Wheless, wrote, “Dr. Bennett took care of my mom, me and now my daughter. I’m 23. You do the math. She’s a phenomenal woman.”

While the practice occupies much of her time, Dr. Bennett also has been involved in outside activities, including local, state and national medical associations. She also is a founder and active member of the James River Chapter of The Links Inc. and a member of Alpha Kappa Alpha Sorority. She also is a former trustee at Fifth Street Baptist and Garland Avenue Baptist churches.

Dr. Bennett believes she was born to be a physician. She said she was 5 when she decided that was her calling. She said she spent her childhood treating her dolls and her pets as her patients, as well as any of her siblings and schoolmates who would let her.

Born in Richmond into a family of educators, Dr. Bennett grew up in Louisa and Hanover counties, returning to the city to attend and graduate from Armstrong High School. She earned a degree in chemistry from Virginia Union University before heading to medical school. After graduating from Meharry, she did her internship and residency in New York at the Harlem Hospital Center.

She married and had two children. Her daughter, Judge Mary Bennett Malveaux, is a lawyer like Dr. Bennett’s sister, Janipher W. Robinson, and became the first Black judge on the Henrico County General District Court. Judge Malveaux now serves as a judge on the Virginia Court of Appeals.

Dr. Bennett said she opened her first pediatric practice in Compton, Calif., while married, then returned to Richmond after divorcing. She said she first took a pediatric post at the Medical College of Virginia, then launched her Richmond practice on North Avenue around 1973.

After her office’s medical building was sold a few years ago, she relocated to her current space.

In a practice in which a major fraction of her patients are on Medicaid, she said that happens more often than she would like. She wishes she had a “magic bullet.”

She said that a portion of the children she sees are “under a lot of stress” and experience challenges in their neighborhoods that many adults are not familiar with.

Dr. Bennett said the only way to address the issue of youth violence is to keep “chipping away” at it. She considers it important for adults in authority to begin by talking and listening to young people to better understand what they are going through. She said adults also need to surround children with love and show them respect, “but most of all listen to their concerns.”

That, she said, is what she has tried to do in her practice for nearly 50 years.