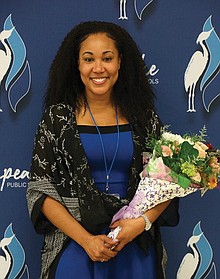 Daphne Tamara Fulson, a second-grade teacher from Port- lock Primary School in Chesapeake, has been named the 2022 Virginia Teacher of the Year.

Gov. Ralph S. Northam announced the winner Oct. 14 during a ceremony outside the Executive Mansion with the state’s eight regional teachers of the year present, including Ashley S. Bland, an instructional technology resources teacher with Richmond Public Schools, who was named the Region 1 Teacher of the Year in early October.

The ceremony was streamed live on the state Department of Education’s YouTube channel.

Upon receiving Virginia’s top teacher award, Ms. Fulson told the audience she had promised her students that she would do a shout out to each and every one of them. She named names as she held back tears of joy.

“It is unreal, it is unreal. You go to work every day, and you just love on the kids and you don’t expect this kind of recognition,” Ms. Fulson said after recognizing her students.

Gov. Northam called Ms. Fulson “an extraordinary teacher who goes above and beyond to support and challenge her students. She is an outstanding representative for Virginia’s exemplary teachers and public schools.”

Ms. Fulson received her bachelor’s degree from Old Dominion University and is currently working on her master’s degree there. She also studied Spanish linguistics at Universidad Veritas in San José, Costa Rica.

Ms. Fulson, who is bilingual, has been a teacher for 12 years. She has been at Portlock Primary School for the last four years, where she is co-chair of the school’s Math and STEAM Committee and is the math lead and city liaison for her school, assisting with the grade-level mathematics curriculum writing.

Before teaching in Chesapeake, she was an English as a Foreign Language instructor for children and adults in Peru. She also previously served as the science fair coordinator and University Interscholastic League creative writing coach for a school of 830 students in Texas.

Ms. Fulson will go on for consideration as the 2022 National Teacher of the Year, which will be announced next spring at a White House ceremony.