‘Something in the Water’ flows to D.C. 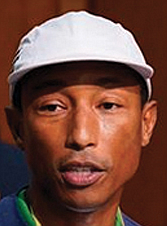 Entertainment superstar Pharrell L. Williams has found a new home for his huge mu- sic festival “Something in the Water.”

Snubbing his hometown of Virginia Beach where he held the inaugural edition of the event in 2019, he’s taking the mega-event to Washington, D.C., where it will run for three days during the Juneteenth holiday weekend, Friday, June 17, through Sunday, June 19.

The dates and location were chosen to coincide with Juneteenth, a new federal holiday celebrating emancipation and the end of slavery in this country. Mr. Williams actively advocated for recognition of June 19 as a state holiday in Virginia, which was signed into law by former Gov. Ralph S. Northam on Oct. 13, 2020. President Biden later signed legislation making it a federal holiday beginning last year.

Mr. Williams, a Grammy Award winner who has scored as a singer, songwriter, rapper, record producer, fashion designer and social justice advocate, made the decision to relocate the music festival from Virginia Beach after police in the resort city shot and killed his 25-year-old cousin, Donovon Lynch, at the oceanfront in March 2021.

Mr. Williams sent a letter to Virginia Beach city officials in October expressing his disappointment in the city’s response to the fatal violence.

But Mr. Williams has been upbeat with the official announcement Tuesday of the festival’s move to Washington. It will take place on the National Mall, along Independence Avenue, and will have three stages featuring entertainers ranging from Usher and the Dave Matthews Band to Lil Baby and Calvin Harris.

Mr. Williams described the event, which attracted 200,000 people to Virginia Beach's oceanfront, as taking "our message of unity, diversity and equality to the nation's capital."

Virginia residents will have special access to a "Virginia Locals Only" ticket pre-sale 10 a.m. to 5 p.m Friday, April 29, in person at the Veterans United Home Loans Amphitheater at Virginia Beach box office.

Three-day passes for the festival go on sale to the public 10 a.m. Saturday, April 30.