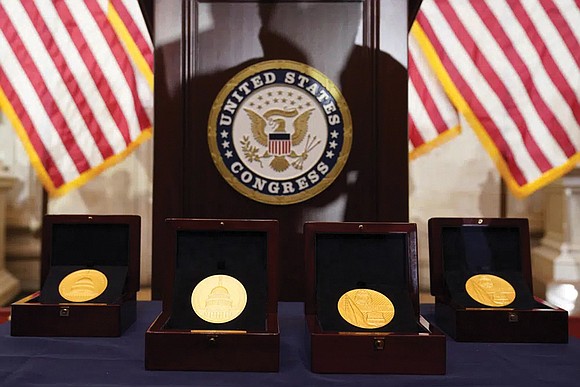 WASHINGTON - Law enforcement officers who defended the U.S. Capitol on Jan. 6, 2021, were honored Tuesday with Congressional Gold Medals nearly two years after they fought supporters of then-President Trump in a brutal and bloody attack.

House Speaker Nancy Pelosi praised the “heroes” as she opened the ceremony in the stately Capitol Rotunda, which was overrun that day when Trump supporters roamed the halls trying to stop Congress from certifying Joe Biden’s election.

In bestowing Congress’ highest honor, Speaker Pelosi praised the heroes for “courageously answering the call to defend our democracy in one of the nation’s darkest hours.”

To recognize the hundreds of officers who were at the Capitol on Jan. 6, the medals will be placed in four locations — at U.S. Capitol Police headquarters, the Metropolitan Police Department, the Capitol and the Smithsonian Institution. President Biden said when he signed the legislation last year that a medal will be placed at the Smithsonian museum “so all visitors can understand what happened that day.”

The ceremony in the Capitol Rotunda comes as Democrats, just weeks away from losing their House majority, race to finish a nearly 18-month investigation of the insurrection. Democrats and two Republicans conducting the probe have vowed to uncover the details of the attack, which came as Mr. Trump tried to overturn his election defeat and encouraged his supporters to “fight like hell” in a rally just before the congressional certification.

Awarding the medals is among Speaker Pelosi’s last ceremonial acts as she prepares to step down from leadership. When the bill passed the House more than a year ago, she said the law enforcement officers from across the city defended the Capitol because they were “the type of Americans who heard the call to serve and answered it, putting country above self.”

“They enabled us to return to the Capitol,” and certify President Biden’s presidency, she said then, “to that podium that night to show the world that our democracy had prevailed and that it had succeeded because of them.”

Dozens of the officers who fought off the rioters sustained serious injuries. As the mob of Trump supporters pushed past them and into the Capitol, police were beaten with American flags and their own guns, dragged down stairs, sprayed with chemicals and trampled and crushed by the crowd. Officers suffered physical wounds, including brain injuries and other lifelong effects, and many struggled to work afterward because they were so traumatized.

Four officers who testified at a House hearing last year spoke openly about the lasting mental and physical scars, and some detailed near-death experiences.

Capitol Police Officer Harry Dunn said a large group of people shouted the N-word at him as he was trying to keep them from breaching the House chamber.