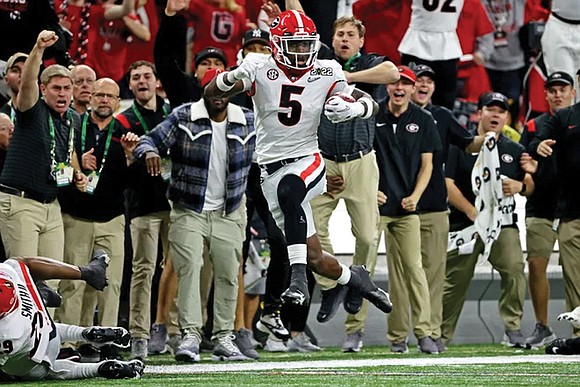 Herschel Walker was the freshman sensation in 1980 when the University of Georgia won the national college football title.

On Jan. 10, another freshman—albeit a redshirt freshman—has given the Bulldogs the rights to bark loudly and proudly clear into next season.

Kelee Ringo was the na- tion’s highest rated cornerback two years ago, coming out of Scottsdale, Ariz. The ratings have proven to be spot on.

Calling it an “indescribable moment,” the 19-year-old Ringo intercepted University of Alabama quarterback and Heisman Trophy winner Bryce Young and returned the ball for 79 scream-out-loud yards to put the finishing touches on a 33-18 Georgia victory for the College Football Playoff Championship at Lucas Oil Stadium in Indianapolis.

Defending champ Alabama was down 26-18 prior to Ringo’s pick six and looking to tie the game with a touchdown and two-point conversion with under a minute left.

Ringo arrived in Athens, Ga., in the summer of 2020 but sat out his true freshman season with a shoulder injury. He waited his turn and was a full-time starter this season.

No doubt about it this time: On Jan. 1, 1981, Walker ran for 150 yards and two touchdowns as Georgia defeated Notre Dame in the Sugar Bowl to clinch the mythical (meaning voted on by news agencies) national title.

It was much more cut-and-dry this go-round thanks to Ringo, who had six solo tackles in addition to his dazzling interception and return. Since 2014, college football has decided its champion in a four-team playoff.

Feeling a draft: Many “Dawgs” will have their names called in the first two rounds of the NFL draft April 28 through 30. The likely first to be picked will be 6-foot-6, 340-pound nose guard Jordan X. Davis, a consensus All-American and a religion major. According to Georgia statistics, Davis did not miss a tackle all season. Others going pro will be cornerback Derion Kendrick, linebacker Nakobe Dean, edge rusher Travon Walker. Dean was the Butkus Award winner for being the nation’s top linebacker.

The quintet returned to campus last March as a group and received a warm homecoming from top officials including President Jere Morehead.

In 1980, Walker, who is from nearby Wrightsville, Ga., was still a distinct minority on Coach Vince Dooley’s roster.

Fast forward: When the Bulldogs took the field Jan. 10 in Indianapolis, there were some 77 African-Americans on the team counting walk-ons. All 11 starting defensive players were Black.

Looking ahead: The Dawgs will open their 2022-23 season on Sept. 3 against the University of Oregon at Mercedes-Benz Stadium in Atlanta. The Ducks are a dangerous opponent. This past season, Oregon opened with a win over Ohio State.

The CFP championship game will be in January 2023 at SoFi Stadium in Inglewood, Calif. Is there another future freshman star out there in waiting?