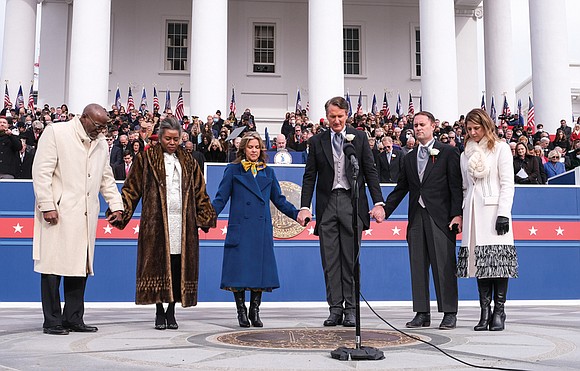 Newly sworn-in Gov. Glenn A. Youngkin, third from right, caps off last Saturday’s inaugural ceremony with a prayer for the Commonwealth he delivered with his fellow GOP top office holders and their spouses. They are, from left, Terence Sears, and his wife, Lt. Gov. Winsome Earle-Sears; First Lady Suzanne youngkin; Attorney General Jason Miyares and his wife, Page Atkinson Miyares. Below, The Virginia union university Choir performs on the steps of the Capitol during the inaugural ceremony. The choir also had been invited by Gov. Glenn A. youngkin to perform with the Richmond Symphony at the inauguration’s Spirit of Imagination Candlelight Dinner last Friday at the Science Museum of Virginia. The choir is under the direction of David Bratton and Assistant Director Joel Lester. Photo by Sandra Sellars

“The spirit of Virginia is alive and well,” Glenn Allen Youngkin declared as after being sworn in as Virginia’s 74th governor.

Calling for an end to toxic politics and division, new 55-year-old Republican chief executive sought to strike a note of unity, saying, “No matter who you voted for, I pledge to be your advocate, your voice, your governor.”

But the wealthy businessman and newcomer to politics quickly shifted in his inaugural address Saturday to sniping at his predecessor, former Gov. Ralph S. Northam, finding the state’s condition grim as a result of the pandemic and saying the gloom could only be dispelled by resilient Virginians following the course he would chart to prosperity.

Gov. Youngkin, a lanky man who grew up in Hampton Roads and played college basketball, decried his Democratic predecessors’ failure to make Virginia the “the best place to live, work and raise a family,” but said he could make that happen.

And just a few minutes after he took the oath of office, he triggered an avalanche of criticism in issuing executive orders aimed ending state government’s involvement in measures to prevent the spread of COVID-19 in public schools and government offices and to remove the teaching of “divisive” racial history from school systems across the state.

Many of his listeners embraced the optimism that coursed through his 20-minute inaugural address. Among them was Dr. Gregory Washington, the first Black president of George Mason University, who said he was buoyed by Mr. Youngkin’s stress on innovation and technology.

Also impressed was William C. “Bill” Cleveland, the former vice mayor of Alexandria, who is Black. He cheered the new governor’s remarks as “uplifting.”

But environmental activists, who stood on the street outside the State Capitol where the ceremony took place, worried that Gov. Youngkin’s remarks made no mention of climate change. Gov. Youngkin remedied that Monday in his first State of the Commonwealth speech to a joint session of the General Assembly.

Among other things, he announced the creation of a new authority to address the impact of rising oceans on Hampton Roads and other coastal areas and vowed to find the money to finally end the discharge of raw and partially treated waste from Richmond, Henrico County, Alexandria and Lynchburg.

Others, though, saw a disconnect between Gov. Youngkin’s rhetoric and the policies he is pushing.

“I am extremely concerned,” Henrico Delegate Lamont Bagby, chairman of the Virginia Legislative Black Caucus, stated in a text to the Richmond Free Press.

He decried the decision of the new governor, who said he supports vaccination and sends his children to a private school that requires everyone to wear masks, “to be hands-off when it comes to tough decision to protect our students from COVID-19” and leave mask policies to local school divisions.

“And the war (he) has declared on Black history is dangerous to say the least,” Delegate Bagby continued.

He noted Gov. Youngkin’s declaration in his speech that the history lessons in schools should “tell the complete history (of Virginia and the nation) — good or bad. That is not what his flawed (executive order) and legislation says.”

The inauguration of the new governor capped a weekend of events that included the installation the most diverse group to hold the state’s three top offices. They include the first female lieutenant governor, Winsome Earle-Sears, a Jamaican immigrant and the first Black woman to win statewide office in Virginia and also the third Black person to hold the office of lieutenant governor; and the first Latino attorney general, Jason Miyares, whose mother came to the United States from Cuba.

Few governors have ever arrived so virtually assured of success in office, unlike many of the former governors who attended the ceremony.

For the next four years, Gov. Youngkin will be breaking ground and cutting ribbons on roads, bridges and transit projects that Gov. Northam initiated and that will be built with the huge stream of federal revenue the state has received from the American Rescue Plan and the infrastructure bill congressional Democrats passed and President Biden signed into law. Much of it, the governor’s fellow Republicans opposed.

Former Gov. Northam, who departed the inauguration with his wife, former First Lady Pamela Northam, after his successor was sworn in, also left Gov. Youngkin a surplus of nearly $10 billion in state tax revenues.

And the former governor left behind a budget proposal for the next two years that incorporates funding to carry out some of Gov. Youngkin’s campaign promises, including record investments in public school education, major increases in salary for state law enforcement and elimination of the state sales tax on groceries.

The new governor has not offered any praise, instead pointing to the hard road ahead and his hopes of turning things around.

“Virginians sent us here on a mission to restore trust in government and to restore power to the people,” he said.

Gov. Youngkin paid tribute to the 15,000 state residents who have died from COVID-19 while declaring that state mandates aimed at preventing the spread of the virus and overcrowding hospitals are dead. He said decisions on protection must be left to government workers, private individuals and parents of schoolchildren.

Despite his insistence that he would work to bind up wounds and end the toxic political atmosphere fueled by soundbites, Gov. Youngkin was labeled the soundbite man by James Downie, Washington Post digital opinions editor.

In his address, Gov. Youngkin focused on his campaign promises in touting his plans to expand the number of public charter schools in the state and to slash state taxes. He also promised to better Gov. Northam’s record of attracting $80 billion in new investment and 100,000 jobs by pushing increased incentives to attract companies to relocate to Virginia.

Gov. Youngkin, who already has hired a diversity director and will make her part of his cabinet, did make inclusion a hallmark of his inauguration. His speech used quotes from the late Dr. Martin Luther King Jr. And the ceremony, itself, put Black groups and individuals at center stage, including Virginia Union University’s choir, which performed during the ceremony and took part in the inaugural parade that followed.

The invocation was delivered by Pastor Calvin A. Duncan, the Black founding pastor of Faith and Family Church in Richmond, while Fairfax parent advocate Suparna Dutta, a native of India, deliver a reading.

Other touches included having a Latino pastor of a Northern Virginia church, Pastor Jonathan Avendano, deliver the benediction. No Muslim imams or Jewish rabbis were included, though.