‘The Bible does not speak about abortion’ 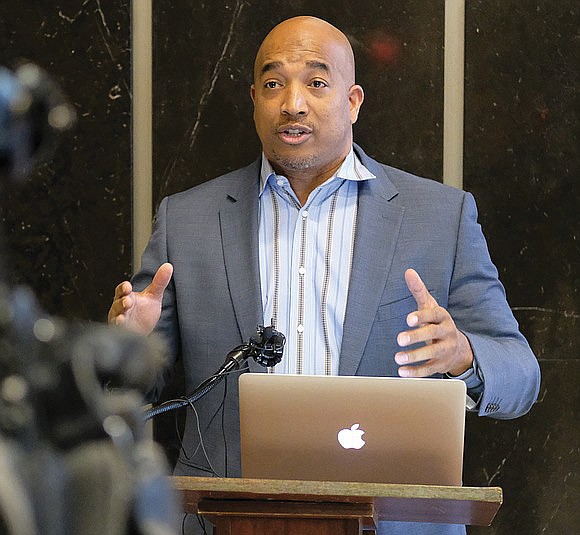 Dr. Michael J. Jones is ready to debate anyone who claims that a ban on abortion is based on the Bible.

In his view, those who seek to lean on the scriptures for support of their opposition to abortion will fall down.

“The Bible does not speak about abortion,” said Dr. Jones, the founding pastor of an independent Christian church called Village of Faith, a member of Richmond’s City Council and a Democratic candidate for the 77th House of Delegates District in 2023.

“There just isn’t any reference to it in the Old Testament or the New Testament. There just isn’t,” Dr. Jones said in an interview with the Free Press, though, as historians note, the practice of abortion dates back thousands of years in human civilization, predating the Bible.

However, he said the Bible does command the faithful to “take care of the homeless, the poor, widows and orphans.

“We’re doing a poor job of that,” Dr. Jones continued. “My thing is, start there first and get off of women’s bodies.”

A University of Colorado graduate, Dr. Jones earned his master’s of divinity degree at the Virginia Union University seminary and his doctorate in ministry from the McCormick Theological Seminary in Chicago.

Dr. Jones has been speaking out on the subject in the wake of the U.S. Supreme Court’s decision on June 24 that over-turned Roe v. Wade, a nearly 50-year-old court decision that provided federal protection for the right of women to terminate a pregnancy, primarily in the first trimester.

The court’s ruling returned to the states the authority to regulate abortions. In some states, the ruling triggered bans on the procedure.

In Virginia, abortion remains legal, but the current governor, Glenn A. Youngkin, wants to limit them to 15 weeks and ban them altogether if Republicans take control of the General Assembly.

Richmond leaders are concerned as the city is home to three of the state’s 15 abortion providers. Any limitations arelikely to have an impact on women’s health. Recently, City Council adopted a resolution putting the city on record as to its willingness to do what it can to defend abortion rights.

Dr. Jones, who opposes the governor’s proposals, is concerned the Catholic Church and right-wing evangelicals are pushing a religious doctrine that lacks a biblical foundation in seeking to control half of the population.

As he sees it, many on the anti-abortion side are “trying to use the Bible to oppress, to manipulate, to cause fear and to demonize a woman’s right to choose.”

To Dr. Jones, the anti-abortionists’argument is rooted in a view that women are not real people gifted with the same autonomy and choice as men, but instead are merely vessels for bearing children.

Essentially, advocates against abortion regard women as duty-bound to be mothers, he said, even though the Bible portrays woman as independent people who are free to make their own decisions, including whether to bear and deliver children.

He said those who oppose abortion use the Bible to claim that human life is precious and that ending that life before birth amounts to murder.

Such advocates are inconsistent in trying to take an ancient book and fit it to modern circumstances, Dr. Jones said. They cherry-pick biblical passages to buttress their position, he said. They tout the commandment not to kill on abortion, he said, but then ignore the story of Saul being chastised by God for disobeying an order to attack the Amalekites and slaughter every man, woman and child among that group, which hardly smacks of respect for life.

“They promote a ban on abortions because of the sanctity of human life,” Dr. Jones continued. “But if they truly believed,” he said, they would be on the front lines opposing war, the death penalty and policies that lead to poverty, hunger, ill health and death.

“Instead, many of those most active in opposing abortion are among the biggest supporters of military adventures, capital punishment and other policies that are harmful to people,” he said.

His position on abortion is supported by numerous Bible scholars.

Jewish thinkers who look to the Talmud, a compilation of rabbinical debates that has become the foundation of the faith’s laws, practices and customs, have long noted that a fetus is not a person with a soul until it has emerged from the womb and taken its first breath.

Numerous Christian theologians note that a fetus or unborn child does not meet the Bible’s depiction of a person as a complex creature vested with the ability to make choices.

Christian scholars also cite the Bible’s disagreement with the anti-abortion portrayal of life beginning at conception.

They point out that among the laws listed in the Book of Exodus is one that states that if someone else’s actions result in injury to a pregnant woman who then miscarries, the punish- ment for the loss of the fetus is a fine to be determined by the husband and a local religious leader.

The only serious penalty imposed under that law is when injury leads to the death of the woman. Then the law states that the person responsible is to be put to death, and the scholars write that the biblical requirement indicates that an actual person is considered far more important than a potential person, which is treated as property.

“In the Bible, people can choose to do a thing or not do a thing,” Dr. Jones said. “We all have a choice, and that includes not carrying a pregnancy to term.”