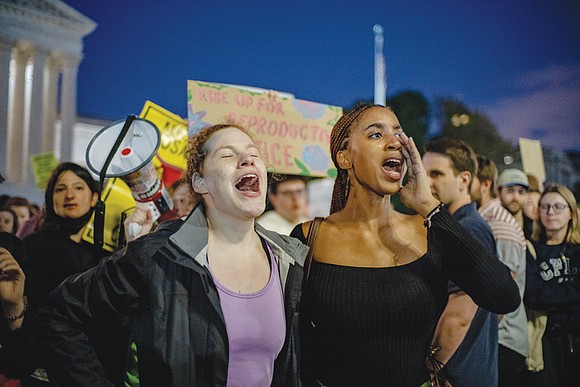 Abortion rights advocates demonstrate Tuesday outside the U.S. Supreme Court in Washington, D.C., after the leak of a draft majority opinion written by Justice Samuel Alito that would overturn the landmark Roe v. Wade decision that has been the law of the land for nearly 50 years. Advocates were met by anti-abortion advocates, who also gathered outside the building to show their support for Roe to be struck down. Photo by Carlos Bernate

President Biden denounced the expected move as “radical” as Democrats in Washington and in statehouses scrambled to try to find a response to defend a right that women in the United States have held for almost half a century.

Some moderate Republicans also were dismayed, but social conservatives were delighted even as they voiced anger that the opinion was leaked.

The court confirmed that the draft opinion, published late on Monday by Politico, was authentic but said it did not represent the final decision of the justices, which is due by the end of June.

Chief Justice John Roberts announced an investigation into how the draft — authored by Justice Samuel Alito of the court’s conservative 6-3 majority — was leaked, calling it a “betrayal” of the confidentiality of the judicial process.

“This was a singular and egregious breach of that trust that is an affront to the court and the community of public servants who work here,” Chief Justice Roberts said, pledging that the disclosure will not undermine the integrity of the court’s operations.

The person who leaked the draft has not been identified.

Nonetheless, the leaked document is galvanizing people on both sides of the issue. Hundreds of people gathered outside the U.S. Supreme Court building in Washington on Monday night and Tuesday to express their dismay with or support of the likely decision. Supporters of abortion rights chanted “Off our bodies” and “Abortion is health care,” while their opponents responded: “Pro-choice is a lie, babies never choose to die.”

In Virginia, abortion rights activists vowed to protect women’s health care and privacy rights, while anti-abortion activists said they will continue to push to outlaw abortion in the Com- monwealth.

“Currently, beagles have more rights to humane treatment than the unborn,” said state Sen. Amanda Chase of Chesterfield, who sponsored legislation to ban abortions after 20 weeks of pregnancy. “Criminals have more due process than the unborn.”

She pledged to continue her efforts to curb abortions and said such laws should be left to state legislatures “whose representatives are elected by the people,” and not to “unelected judges.”

Republican Gov. Glenn A. Youngkin, who campaigned on limiting abortion access in Virginia, reiterated in an interview Tuesday that he is pro-life. “I’ve been very clear about that since the day I launched my campaign,” he told Virginia Scope, a political newsletter.

But he dodged questions about how far he would take any abortion prohibitions, saying “We are going to have to wait until the Supreme Court decision is final before we can really define where we’re going to go.”

He said, however, that “Virginians want fewer abortions.” Democrats fired back.

“While Republicans will undoubtedly launch new attacks on a women’s right to choose, Virginia Democrats remain deeply committed to protecting Virginians’ right to an abortion,” Susan Swecker, chairwoman of the Democratic Party of Virginia, said in a statement. “We will fight every single effort put forward by Gov. Youngkin and Republican leadership to criminalize abortion and will ensure that Virginians have access to health care and reproductive health care they need.”

Women’s health groups don’t expect any immediate change in Virginia should Roe v. Wade be reversed. Currently under state law, abortions can be performed by licensed medical staff in the first three months of pregnancy and at a state-licensed hospital during the second trimester.

However, in the final three months of pregnancy, abortions are allowed only if three physicians agree the pregnancy will lead to the woman’s death or “substantially and irremediably impair the mental or physical health of the woman.” Written consent is required and life support must be available for the fetus if it survives the procedure.

A ruling by the court striking down Roe would give many Republicans and religious conservatives a victory they have chased for decades.

“It’s a fundamental shift in American jurisprudence,” President Biden said Tuesday of Justice Alito’s draft ruling, arguing that such a decision would call into question other rights including same-sex marriage, which the court recognized in 2015.

“If it becomes the law, and if what is written is what remains, it goes far beyond the concern of whether or not there is the right to choose,” President Biden added, referring to abortion rights.

Vice President Kamala Harris blasted efforts to turn back the clock on a woman’s right to choose to have an abortion and to reverse Roe, which she said protects the fundamental right to privacy.

“What is clear is that opponents of Roe want to punish women and take away their rights to make decisions about their own bodies. Republican legislators in states across the country are weaponizing the use of the law against women,” she said in a statement.

“The rights of all Americans are at risk. If the right to privacy is weakened, every person could face a future in which the government can potentially interfere in the personal decisions you make about your life. This is the time to fight for women and for our country with everything we have.”

The Roe decision recognized that the right to personal privacy under the U.S. Constitution protects a woman’s ability to terminate her pregnancy.

Biden vowed to work toward getting Congress to pass legislation codifying the Roe ruling and urged voters to back candidates in the Nov. 8 congressional elections who support abortion rights.

U.S. Senate Majority Leader Chuck Schumer said the chamber will vote next week on such legislation even though a similar Democratic-backed bill already failed this year.

Amid Republican opposition, the razor-thin Democratic majority in the U.S. Senate is not enough to overcome Senate rules requiring a supermajority to advance most legislation.

Even if the new Senate vote fails, as is almost inevitable, Democrats could use it to bolster their chances in the midterm elections in which Republicans are hoping to regain control of Congress.

Nearly two-thirds of Americans said they are more likely to back candidates who support the right to abortion in the November vote, according to a Reuters/Ipsos poll conducted on Tuesday.

However, 13 states have passed so-called “trigger laws” that would immediately ban abortion if the U.S. Supreme Court reverses Roe. On Tuesday, the governor of Oklahoma signed a ban outlawing abortions after six weeks, before many women know they are pregnant.

Planned Parenthood, a national organization that provides a range of health services to women including abortions, said it was horrified by the draft ruling, although its clinics remain open for now.

“While we have seen the writing on the wall for decades, it is no less devastating,” said Alexis McGill Johnson, the group’s president.

The case at issue involves a Republican-backed Mississippi ban on abortion starting at 15 weeks of pregnancy, a law blocked by lower courts.

“Roe was egregiously wrong from the start,” Justice Alito wrote in the draft opinion.

Roe allowed abortions to be performed before a fetus would be viable outside the womb, between 24 and 28 weeks of pregnancy. Based on Justice Alito’s opinion, the court would find that Roe was wrongly decided because the Constitution makes no specific mention of abortion rights.

“Abortion presents a profound moral question. The Constitution does not prohibit the citizens of each state from regulating or prohibiting abortion,” Justice Alito wrote.