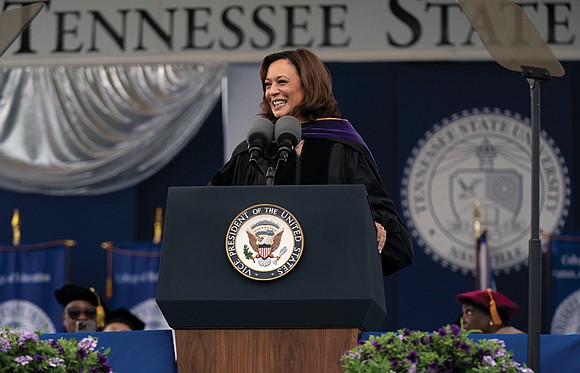 Vice President Kamala Harris urged graduates of Tennessee State University on Saturday to apply their leadership skills to help tackle the multitude of challenges posed by an unsettled world.

In her undergraduate commencement speech at the historically Black university in Nashville, Tenn., Vice President Harris said the Class of 2022 stands “on the brink of a new frontier,” pointing to the prospects of more breakthroughs in technology and medical research.

But with war raging in Ukraine, the risks from climate change and basic freedoms under threat in the United States, graduates are stepping off into an uncertain future, she said.

The vice president also stressed her connection to the TSU graduates as a fellow graduate of another historically Black university. She recalled seeing Howard University, her alma mater,

the first time she flew on the vice presidential helicopter. While reminiscing about her time as a student, she said it reinforced the realization that “I could be anything, do anything, even if it had never been done before — like you.”

Vice President Harris — the first female U.S. vice president, and the first Black woman and person of South Asian descent in the role — received a rousing welcome from the commencement crowd.

While the graduates are entering a world “full of possibility,” the vice president also pointed to a series of challenges threatening “fundamental principles” across the globe and in the United States.

Russia’s invasion of Ukraine threatens “international rules and norms,” she said. In the United States, she pointed to the need to protect voting rights and women’s rights.

“You graduate into an unsettled world both abroad and here at home,” the vice president said. “In the United States, we are once again forced to defend fundamental principles that we hoped were long settled,” she said. “Principles like the freedom to vote, the rights of women to make decisions about their own bodies. Even what constitutes the truth, especially in an era when anyone can post anything online and claim it is a fact.”

The vice president pointed to roiling issues like climate change that have accelerated and other problems that have long persisted—disparities in wealth, access to health care and in the criminal justice system.

“And graduates, I look at this un- settled world and yes, I then see the challenges,” she said. “But I’m here to tell you, I also see the opportunities. The opportunities for your leadership.”

In stressing their potential, she told the graduates that they survived a global pandemic and have the advantage of growing up in the digital age.

Vice President Harris received an honorary degree from TSU during the ceremony.