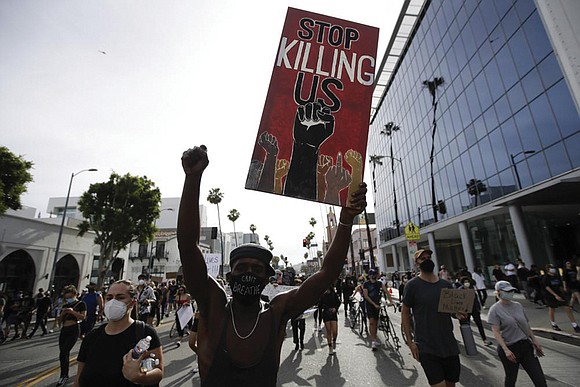 A protester carries a sign in the Hollywood area of Los Angeles on June 1, 2020, during demonstrations after the killing of George Floyd, which sparked calls for a racial reckoning to address structural racism that has created long-standing inequities impacting generations of Black Americans. Marcio Jose Sanchez/AP Photo

Black Men Heal co-founder Zakia Williams was deeply moved as she watched a young Black man become emotional while speaking about the mental health toll the past few years have taken on him.

“He said, ‘I just want to play basketball without fear of getting shot, I just want to live. I just want to be,’” Ms. Williams recalled the young man saying at a virtual group therapy session, Kings Corner, that her Philadelphia-based group holds weekly for Black men across the U.S. and internationally.

“A lot of our men report being overwhelmed, tired and feeling like they’re being attacked. They see themselves in George Floyd. Each one of them says, ‘That could have been me.’”

Wednesday, May 25, marks the second anniversary of Mr. Floyd’s killing by a Minneapolis police officer, which sparked a global protest movement and calls for a racial reckoning to address structural racism that has created long-standing inequities impacting generations of Black Americans.

Mr. Floyd’s slaying, along with a series of killings of other Black Americans, has wrought a heavy toll on the emotional and mental health of Black communities burdened by centuries of oppressive systems and racist practices. Mental health experts say the racism that causes the trauma is embedded in the country’s fabric and can be directly linked to the mental duress many experience today.

“Continuously seeing these images of Black people being killed ... can elicit trauma-like symptoms in Black people and others who feel somehow connected to what is going on,” she said. This “impact of vicarious therapists of color with men, who are given eight free individual therapy sessions. More than 1,100 therapy sessions have been provided since the group started and 50 therapists have been recruited. Nearly 80percent of the men continue their mental health care beyond the free sessions.

After the Buffalo shooting, some Black Americans have expressed outrage and fear, saying they should be able to go about their daily lives without feeling they could be threatened or killed. The grocery store where the attack happened was a gathering place, especially for older community residents.

Black organizations have been working to get resources to the Buffalo shooting victims’ families, including access to mental health care. Phylicia Brown, executive director of Black Love Resists in the Rust, said the member-led, abolitionist organization has been collecting donations to provide a year of mental health service access to residents impacted by the shooting.