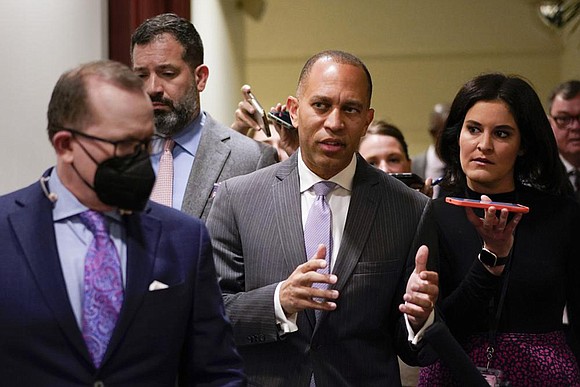 Rep. Hakeem Jeffries, D-N.Y., talks with reporters Thursday on Capitol Hill in Washington. The day after Speaker Nancy Pelosi announced she would step aside, Rep. Jeffries announced his own history-making bid Friday to become the first Black American to helm a major U.S. political party in Congress as leader of the House Democrats. Associated Press file photo

NEW YORK - A day after Speaker Nancy Pelosi announced she would step aside, Rep. Hakeem Jeffries of New York launched a history-making bid Friday to become the first Black person to helm a major political party in Congress as leader of the House Democrats.

In a letter to colleagues, Jeffries gave a nod to the “legendary figures” before him: Speaker Pelosi, the first female speaker in U.S. history, and her leadership team. He encouraged his fellow House members to embrace a “once-in-a-generation opportunity” to unleash their “full potential as a team.” And he pledged to draw on the diverse Democratic caucus as it works to govern in a divided Congress and win back the majority after House Republicans narrowly seized control in the midterm elections. 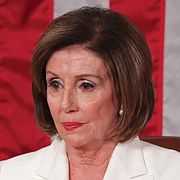 “The House Democratic Caucus is the most authentic representation of the gorgeous mosaic of the American people,” Rep. Jeffries wrote. “I write to humbly ask for your support for the position of House Democratic Leader as we once again prepare to meet the moment.”

Along with Speaker Pelosi, the other top two House Democrats — Rep. Steny Hoyer of Maryland, the majority leader, and Rep. James Clyburn of South Carolina, the whip — also announced their intentions to step down from the top posts. All three are in their 80s. Rep. Clyburn is stepping down as whip but says he wants to remain in leadership.

A new generation wasted no time preparing to take their place. Along with Rep. Jeffries, Reps. Katherine Clark of Massachusetts and Pete Aguilar of Cali- fornia — who have worked together as a lower-rung leadership team — swiftly wrote to colleagues with their bids for the second- and third-ranking positions in House Democratic leadership. Reps. Jeffries and Clark are in their 50s, while Rep. Aguilar is in his 40s.

The trio has been working together for years, preparing for just this moment, seeking to engineer a smooth transition when Speaker Pelosi, Rep. Hoyer and Reo, Clyburn decided to leave.

“It is with pride, gratitude and confidence in their abilities that I salute Chairman Hakeem Jeffries, Assistant Speaker Katherine Clark and Vice Chairman Pete Aguilar for being ready and willing to assume this awesome responsibility,” Speaker Pelosi said Friday in a statement.

House Democrats will meet behind closed doors as a caucus in two weeks, after the Thanksgiving holiday, to select their members. So far, Rep. Jeffries, Rep. Clark and Rep. Aguilar have no stated challengers.

The Brooklyn-born Rep. Jeffries has long been seen as a charismatic new leader, known for his sharp but careful style, first in New York politics and then when he entered the national stage upon winning election to Congress in 2012.

A former corporate lawyer and state assemblyman, Rep. Jeffries has represented Brooklyn and parts of Queens for a decade and quickly rose through the ranks in Congress, serving as the party’s 5th-highest-ranking member as chair of the House Democratic Caucus.

“You could sense there was some purpose in him,” said the Rev. Al Sharpton, the civil rights leader, recalling the quiet and pensive young lawmaker he first met decades go.

“He always seemed like a guy that was headed somewhere but was willing to pace himself to get there,” Rev. Sharpton said. “You meet a lot of people that are ambitious, that would do anything. You never got that impression from Hakeem.”

While Rep. Jeffries has been part of the Congressional Progressive Caucus, he’s seen as a more moderate, business-friendly lawmaker who is sometimes at odds with the House’s furthest-left members.

But his appeal rests in his political skill at a transformative time as Speaker Pelosi and her team make way for a new era.

If Rep. Jeffries is chosen to serve as the minority leader, the Democrats will be led in both chambers of Congress by men from Brooklyn — Senate Majority Leader Chuck Schumer, a Brooklyn native, lives in a neighborhood near where Rep. Jeffries lives with his wife and two sons.

His district includes the Black cultural hub of the Bedford-Stuyvesant neighbor- hood, home to Jackie Robinson and once represented by Shirley Chisholm, the first Black woman elected to Congress.