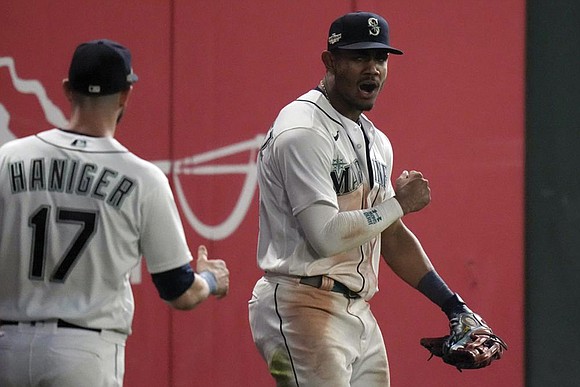 Seattle Mariners center fielder Julio Rodriguez celebrates after making a catch for an out against the Houston Astros.

Athletes of color continue to dominate the headlines for Major League Baseball’s Rookie of the Year voting.

The annual award is named after Jackie Robinson, who was the first Rookie of the Year with Brooklyn in 1947.

This year’s recipients are Atlanta’s Michael Harris in the National League, and Seattle’s Julio Rodriguez in the American League. Both are fleet, 21-year-old center fielders.

Harris jumped from Class AA Mississippi to the parent Braves, and was an instant difference maker. The left-hander hit .297 with 19 homers, 64 RBI and 20 stolen bases.

A native Georgian, Harris was Atlanta’s third-round draft pick in 2019.

Rodriguez, who signed with Seattle as a 16-year-old out of the Dominican Republic, hit .284 with 28 homers, 75 RBI and 25 stolen bases in his big-league debut.

With Rodriguez the latest, the Dominican, a Spanish-speaking Caribbean Isle, has produced a disproportionate number of rookie winners.