Students return to campus amid water crisis in Mississippi 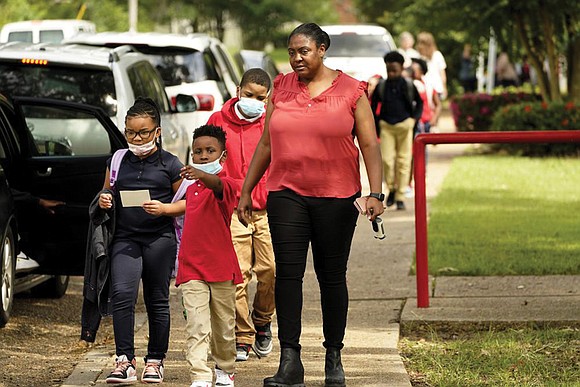 Spann Elementary School principal Lori G. Torrey, below, leads a group of children to their parent’s cars following a full day of in-school learning after having to again undertake virtual learning classes due to the city’s water issues that forced Jackson Public Schools to close for several days. Photo by Rogelio V. Solis/Associated Press

JACKSON, Miss. - While its water crisis continued, students in Mississippi’s capital returned to class for the first time in a week Tuesday with assurances that the toilets and sinks in their buildings would finally work.

Jackson remained under a boil water advisory, but the drop in water pressure that had brought the system to near collapse appeared to be resolved, officials said.

Sherwin Johnson, a spokesperson for Jackson Public Schools, confirmed in a statement to The Associated Press on Tuesday, Sept. 6, that schools had re-opened after a drop in water pressure forced a move to virtual instruction.

A line of cars snaked around the block in front of Spann Elementary in Northeast Jackson as parents arrived to pick up their children. Syreeta Tatum waited for her fourth-grader to emerge from the building and lamented the uncertainty Jackson’s water woes had foisted upon parents and students.

“It was very frustrating,” said Ms. Tatum. “As a mother, you want to make sure your child is getting the best educa- tion possible, especially knowing that my child functions better in person.”

In a statement posted to Twitter on Mon- day, the school district said it had “checked water pressure at each school” and found that “nearly all are suitable” for students and staff to return. Air conditioning systems at several schools depend on the water system to run effectively. The district said it anticipated delays in cooling buildings as temperatures reached the mid-80s on Tuesday.

“We are continuing to monitor and have portable fans and air conditioners to reduce temperatures in warm or hot areas,” Mr. Johnson said.

Torrential rains and flooding of the Pearl River in late August exacerbated problems at one of Jackson’s two treatment plants, leading to a drop in pressure throughout the city. The school district said Forest Hill High School in South Jackson still didn’t have water pressure. Mr. Johnson said students who attend Forest Hill were transported to alternative sites Tuesday.

In a Tuesday news conference, Jackson Mayor Chokwe Antar Lumumba said the water storage that was built over the weekend has decreased some over the past 24 hours.

“The safety net that has been built up has decreased and has diminished,” Mr. Lumumba said. “That is why we’re prayerful that everything remains consistent.”

If a challenge arises with plant operation Tuesday, it will likely impact customers, the mayor said.

In a Monday news conference, Gov. Tates Reeves said water distribution at schools would be scaled down in preparation for students’ return to campuses.

“We are moving those resources to our other water distribution mega-sites,” Gov. Reeves said. “Those sites have slowed down in demand a bit, but we have still put out about 5 million bottles of water over the last several days.”

Santonia Matthews, a custodian at Forest Hill High School in Jackson, Miss., hauls away a trash can filled with water from a tanker in the school’s parking lot on Aug. 31. The tanker is one of two placed strategically in the city to provide residents non-potable water. The recent flood worsened Jackson’s long-standing water system problems and the state Health Department has had Mississippi’s capital city under a boil-water notice since late July.

Soon after water stopped flowing through the pipes of many households throughout Jackson, officials rolled a tanker into Forest Hill’s parking lot for water distribution. Santiago Matthews, a maintenance worker for the high school, had a garbage container filled to the brim with water last week to fill toilets for the staff working inside. He hauled the garbage container up a short incline back to the high school with water sloshing over the sides.

Gov. Reeves said Monday that the city had “zero water tanks at low levels.” He also said repairs resulting in cleaner water do not eliminate every risk.

“There may be more bad days in the future,” Gov. Reeves said.

Liz Oviede, a student at Delta Technical College, picked up her 10-year-old brother Tuesday so her mother wouldn’t have to miss work. Her mother missed work at least three days last week to supervise the boy as Spann shifted to virtual learning. Recounting a recent weekend trip to Houston, Texas, she longed for cleaner water.

“My face cleared up, my hair was so much softer and my hair is always so crunchy here and it doesn’t feel clean,” Ms. Oviede said. “I just wish they’d get it together and stop bringing politics into it.”