Spotlight on the co-chair of the RVA East End Festival 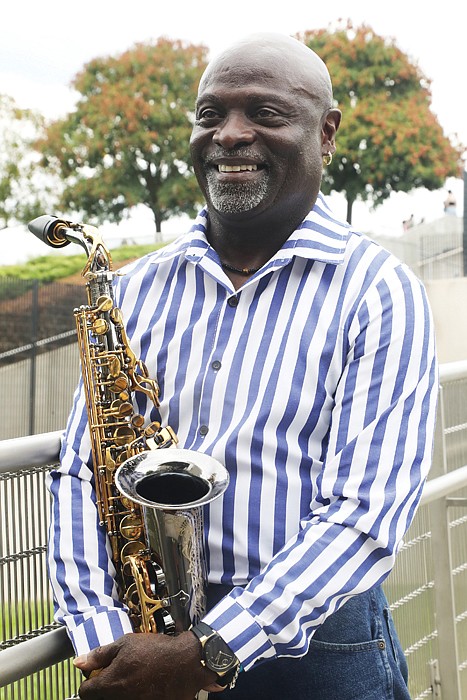 “Together we can make it!”

For James B. “Saxsmo” Gates Jr., this phrase, which originated with one of his songs, is a distillation of the universality and practicality he believes is key to jazz music and the genre’s communities. An accomplished musician and director of jazz studies for Virginia State University, he is putting his skills and philosophy to work as co-chair of the RVA East End Festival.

Mr. Gates was approached about serving in the role last May by Marilyn Heckstall, chairwoman of the East End Festival. His musical background and personal connection with the East End as a result of growing up in Fairfield Court, convinced Rev. Heckstall that Mr. Gates would have a “monumental impact” on the event’s success.

At the same time, Mr. Gates was eager to help Richmond area children grow and learn to appreciate music, and believed that serving as the festival’s co-chair was one way to meet his goal.

“We need to bring back a cohesiveness to the community in order to move forward and continue to grow in the arts and instrumental music for our students and their community,” Mr. Gates said.

Since 2016, the festival has been a vehicle for arts appreciation and has raised more than $400,000 to support arts programs in Richmond Public Schools’ East End.

As co-chair, Mr. Gates helps brainstorm ideas for the event and provide his perspective for board members who have limited experience in the arts. He also is a role model for everyone involved in the festivities, especially young people.

“If I can be a blessing to someone and inspire them through music to be the best person they can be by studying hard, getting good grades, and applying what they have learned,” Mr. Gates said, “I will have achieved a goal that makes me feel good to have accomplished it.”

Mr. Gates’ own life is a testament to his love of music. As a performer since sixth grade, he gained the nickname “Saxsmo,” a spin on Louis “Satchmo” Armstrong, in 1970. His commitment to his craft continued when he enrolled as a VSU freshman, while working with music legends such as Marvin Gaye, The Temptations, Dizzy Gillespie, and today where he routinely performs on local, national and world stages. Working to make sure this year’s festival is the best ever, Mr. Gates, who always draws crowds with his saxophone skills, will perform during the festival. His desire to bring attention to the arts won’t end with this year’s festival. In the future, he hopes to appear before the Virginia General Assembly to make the case for more state investment in the arts. While that may be a tall order given the competition from other organizations that also seek state funding, but Mr. Gates’ belief in the power of music and the arts is resolute.

“It is the driving force that brings people together,” said Mr. Gates when asked about the importance of the arts for the Richmond community. “It provides a connection with one’s culture as well as uniting different cultures.”

Date and place of birth: Sept. 21 in Richmond.

When and why started: The RVA East End Festival was conceived in the East End community in 2015 by community leaders who believed that there are “God’s blessings in community.” The first festival in May 2016 served “to inspire our students to prioritize excellence in education, music and the arts as a foundation for their future.”

Why I accepted co-chair position: I accepted the co-chair position because I am passionate about helping our children grow, learn and develop into successful adults. This is especially near, dear to my heart, and personal to me since this is the neighborhood where I was born, grew up and had my start in music. To be able to provide some of the opportunities I had and experienced as a child is a powerful... having incredible parents, supporting family, neighborhood mentors, spectacular giants of jazz who happened to be many of my teachers through elementary, middle and high school.

• My parents’ background in music;

• Caring and loving teachers, such as John Peyton, Joe Kennedy, Tuscan Jasper, Dave Hog- gard, James “Plunky” Branch, members of The Richmond Jazz Society, Gregory McCallum and others who were the backbone of my development as a young artist.

• One special teacher, Mr. Ethan Pitts Sr., who helped me on my path to receive a full scholarship to Virginia State University. He was my science teacher and my head baseball coach at John F. Kennedy High School.

• I have recorded five major recordings that are available to the public. Three of these recordings received Grammy nominations.

• I am the founder and director of the Dr. Billy Taylor Jazz Studies Program at Virginia State University, where I have worked for 11 years.

Number one goal as co-chair: My goal as co-chair is to be a positive role model for everybody, not just children, but everybody! If I can be a blessing to someone and inspire them through music to be the best person (they can be) I will have achieved a goal that makes me feel good.

Richmond Public Schools and the RVAEast End Festival: The RVA East End Festival will be celebrating its fifth annual event at Henry Marsh Elementary School, 818 N. 28th St. Henry Marsh Elementary is a beautiful new school with innovative technology, to provide a necessary environment for creative, challenging, productive learning. The festival will be Saturday, Sept. 24, 2022 from 12 noon to 9 p.m.

A perfect day for me is: A perfect day for me is first thanking God for all of His blessings. There is no way, I could even imagine making it from sun up to sundown without God’s blessings. He is the only reason why I am existing today! Now for a bonus, a perfect day would be for me to shed (practice for those who do not know what that means) for at least four hours or longer a day, to play tennis as long as I can stand, and to be able to exercise period. I have to also include to always be willing to give back and help someone in whatever capacity is needed.

What I am continuing to learn about myself during the pandemic: Life is too short to not give 110 percent each day. Tomorrow is not given; therefore, there is a quote by the late great Paul Chambers (bassist) “To Play Like There’s No Tomorrow.” Those who know me, know that each day, each opportunity that God blesses me with being able to play the saxophone, I take it literally and play like there is no tomorrow.

Something about me that people may not know: I do slow down sometimes!

How music and visual arts inspire me: Music is me! I am always moved by visualizing what I’m hearing in my head. Another quote: “If you can visualize what you see entirely and hold it in your hand, then it will become a reality.”

A quote that inspires me: “Perfection is Not Optional.”

My friends describe me as: A live wire.

At the top of my “to-do” list is: To complete my next recording.

The best thing my parents ever taught me: To be consistent, persistent and patient!

Book that influenced me the most: “Celebrating BIRD: The Triumph of Charlie Parker” by Gary Giddins.

What I’m reading now: “The Music of Black Americans” by Eileen Southern; “Jazz: From Its Origins to the Present” by Lewis Porter, Michael Ullman with Edward Hazell; “Miles: The Autobiography” by Miles Davis with Quincy Troupe.