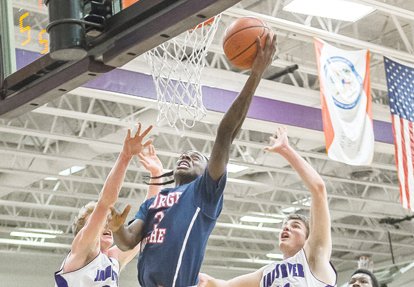 In 1975, Willard Coker was an up-tempo, high-energy guard who led Winston-Salem’s R.J. Reynolds High School to the state championship in North Carolina. Now, 40 years later, Coach Coker — still brimming with energy — is close to winning another high school state title state, this time as coach. Coach Coker’s fast-breaking George Wythe High School Bulldogs were playing unbeaten Spotswood High School of Rockingham County in the State 3A finals at Virginia Commonwealth University’s Siegel Center at press time for the Free Press on Wednesday, March 11. The Wythe Bulldogs improved to 25-4 on Tuesday, March 10, by cruising past Northside High School near Roanoke, 78-57. Coach Coker “let the Dogs out” at just the right time for peak perfection.