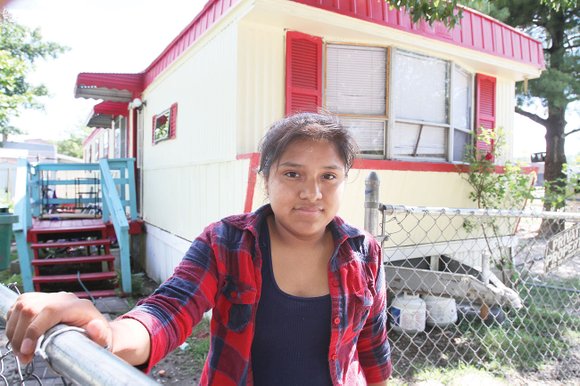 July 31-August 2, 2014 — For Olivia Leon-Vitervo, this has not been a leisurely summer vacation.

Instead, she has spent her time off from school trying to save Rudd’s Trailer Park.

The rising senior at Thomas Jefferson High School has become a hero to her neighbors in the impoverished South Side community.

Olivia is fighting to keep Rudd’s from being ripped apart after a city crackdown over safety concerns.

It’s a labor of love for the determined 18-year-old.

“We’re close, and we all look out for each other,” the honors student said of the residents of the mobile home park in the 2900 block of Jefferson Davis Highway.

A Saturday night visit to Rudd’s by a Free Press reporter confirmed the intimate connections among the residents.

In front of one mobile home, African-American friends played cards.

Around the corner, a Latino family grilled savory chicken.

Nearby, children jumped rope and took piggyback rides from neighbors.

Olivia and her neighbors fear their tight-knit community could face extinction, and that many of them could become homeless after a months-long inspections sweep by the city that began in February.

They placed orange eviction notices on the 10 trailers that directed residents to leave before 5 p.m. that day.

The notices indicated trailer owners would be allowed to return if they made mandated renovations within 30 days.

Unable or unwilling to foot the bill to make the upgrades, none of the evicted persons have so far returned.

City officials directed the evicted persons to seek assistance at the Department of Social Services office at Southside Plaza, according to park owner Ronnie Soffee.

Some of the displaced families found shelter with relatives. Others are are being assisted with food and housing by faith organizations such as First Baptist Church, Sacred Heart Catholic Church and Commonwealth Catholic Charities.

Meanwhile, the city is threatening to shutter most of the rest of the park’s 75 operational trailers, Mr. Soffee said. He said he would be forced to close the park and consider selling the property if that happened.

Olivia has no idea where she and her neighbors could find new housing if they were evicted.

Of the remaining trailers, nearly 60 aging units have been cordoned off because of flaws in the units that connect electricity to the trailers. Mr. Soffee has been told the equipment will have to be upgraded.

Mr. Soffee said he hopes to improve or replace the electrical connections within a month at a cost of about $10,000 so families can continue to use the trailers.

Meanwhile, Olivia has been translating city communications to frightened and often confused Latino neighbors, who do not speak or understand English well.

She also canvasses the neighborhood to help residents understand what repairs are needed and how much it will cost to get their mobile homes in compliance with the state code for manufactured homes.

“I feel it is my moral calling to help,” said Olivia, who lives in the trailer park with her parents and five siblings and hopes one day to be an engineer. Her family moved here from Guerrero, Mexico, seeking a better life.

She said her family’s trailer was not condemned, but inspectors cited an unsafe porch at their home and a defective electrical unit. She estimated it would cost the family $400 alone to do electrical repairs and have an engineer approve the work.

Olivia said her uncle, aunt and two children were evicted from Rudd’s and moved in with another family as they try to find a permanent home.

Mayor Dwight C. Jones’ office did not reply to Free Press queries asking if the city would help the residents rather than evict them and how the actions fit his stated mission to alleviate poverty in the city.

Olivia boldly took the case of her neighborhood to City Hall last week with other members of a grassroots coalition of legal, housing and faith-based organizations, formed to help Rudd’s residents.

There, coalition members asked the city to be patient as residents raise money and seek ways to upgrade their trailers, instead of kicking them out with little notice.

“It may not look like the best place to everyone else, but it’s the best place for us,” Olivia respectfully told members of City Council’s Land Use, Housing and Transportation Committee.

She said mobile homes are among the most affordable places for struggling Latino families working to move up the ladder of opportunity.

City Council member Reva M. Trammell, whose 8th District contains the trailer park, praised Olivia for what she has done.

Ms. Trammell said she backs the city’s inspection effort. She emphasized the intent is not to displace Rudd’s residents, but to ensure their mobile homes meet safety codes.

Tom Blanton, a resident of Rudd’s since 2008, scoffed. He called the focus on Rudd’s “selective enforcement” and “harassment” designed to remove a trailer park some “consider an eyesore.”

Mr. Blanton said the city could better use its scarce financial resources to repair its crumbling schools. “Most of the city schools wouldn’t pass code,” he said.

Mr. Soffee, a 66-year-old Richmond native, has owned and managed the park since 1997 when he inherited it from an aunt.

“The most amazing thing that I’ve seen for more than 10 years is that the Latino families come in here, work on the trailers to make them livable, then buy a house and give the trailer to a relative.

“If that’s not the American dream, then what is?” he asked.

Douglas H. Murrow, the city’s commissioner of buildings, said he directed six inspectors to comb through Rudd’s after fires at two mobile home parks in recent years, including one at Rudd’s in 2012.

Mr. Murrow said investigators determined that the poor condition of the trailers and overcrowding contributed to the fires.

The commissioner said Rudd’s was the first park to be inspected.

He chose Rudd’s, he said, because it’s the largest and “in the worst overall condition” of the city’s nine mobile home parks.

Mr. Soffee said this is the fourth time that city inspectors have conducted such inspections and is not aware of inspectors investigating any other trailer parks in the city.

Mr. Murrow, in response to a Free Press query, said he plans inspections for the majority of the approximately 530 mobile homes in the city. He did not give a timetable for doing so.