Trailer park under pressure for repairs 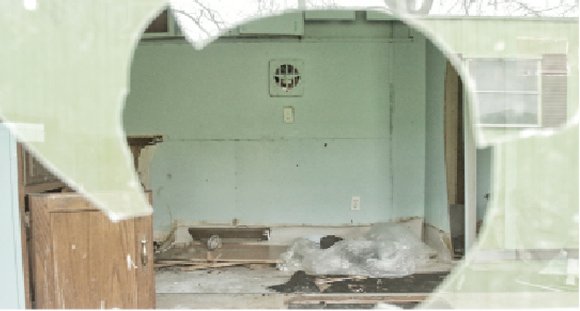 A view through a trailer’s broken window shows the destruction inside. Photo by Sandra Sellars

Abandoned trailers at Rudd’s Trailer Park on Jefferson Davis Highway on South Side present an inviting target for vandals.

Is the city on a code enforcement witch hunt to force vulnerable Latino citizens and other poor people to move from their mobile homes, which are for many a residence of last resort?

Or are code enforcement officers merely fulfilling their duties by issuing a plethora of violations to residents at selected mobile home parks they deem hazardous to ensure they upgrade their homes for safe habitation?

The answer depends on whom you ask. This week, officers from the city’s Bureau of Permits and Inspections began trailer-by-trailer inspections at the 106-unit Mobile Towne Mobile Home Park off Old Midlothian Turnpike. Mobile Towne, like many of the city’s eight other mobile home parks, has a large Latino population.

It is the city’s second inspection sweep of a big mobile home park during the past year.

Douglas H. Murrow, the city’s commissioner of buildings, told the Free Press inspectors are going to mobile home parks that are “in the worst overall condition.”

He said they look for code violations, such as banned alterations to the pre- manufactured structures and alterations of the electrical, plumbing or mechanical systems that have not been inspected by code enforcement officers and leave the mobile homes unsafe.

The city began this latest inspection campaign in February 2014 when Mr. Murrow directed six inspectors to comb through Rudd’s Trailer Park off Jefferson Davis Highway in South Side for safety violations. Mr. Murrow said he chose Rudd’s after fires at two mobile home parks in recent years revealed “life-safety issues.” One of those fires occurred at Rudd’s in 2012.

Ronnie Soffee, the 67-year-old co-owner and manager of Rudd’s, said the city has unfairly targeted his mobile home park for a decade and has intensified its efforts during the past year.

“They’ve been increasing the pressure,” with the ultimate goal to get “me and the Hispanic people out of this neighborhood,” Mr. Soffee said.

Mr. Soffee said about 20 mobile homes were condemned and many residents were evicted and forced to leave their mobile homes because they could not afford to pay to upgrade them to meet code require- ments. Others just left, he added, out of frustration or fear they could be next.

Mr. Murrow said displaced residents are referred to the city’s Department of Social Services for assistance.

A year later, Mr. Soffee said Rudd’s is now down to “50-some” rent-paying mobile home residents and not all of them pay the entire amount due each month. “I tell them to pay whatever they can,” Mr. Soffee said.

He said he’s also in arrears on water bills and city real estate taxes, with the unpaid amounts on each well in excess of $10,000. He said he has made payments the best he could as increasing numbers of rent-paying residents move out. He showed a Free Press reporter two separate water bills from the city threatening to cut water service to park residents early this month if he did not pay at least $16,000.

“I don’t have that kind of money,” Mr. Soffee said.

He said he has requested an extension to come up with the money, but is not sure whether the city will disconnect water services or not.

“I’m such a nervous wreck. I can’t sleep,” Mr. Soffee said. “My stomach is in knots. I try to tell people we’re doing the best we can.”

Meanwhile, a 16-member group of churches, nonprofit organizations and other service providers known as the Mobile Home Park Coalition, which formed last spring to aid residents at Rudd’s Trailer Park, is working to provide financial assistance to displaced residents, according to Phil Storey, an attorney with the Legal Aid Justice Center.

He said the coalition, without investi- gating Rudd’s assessment value or other financial details related to the park, offered Mr. Soffee $200,000 to purchase the park, but that Mr. Soffee declined their offer in the fall.

“The property is assessed at $2.2 mil- lion,” Mr. Soffee told the Free Press. “I told them they might as well be wearing masks because they were trying to rob me.”

Mr. Storey said the coalition also has separately offered to provide $300,000 for “immediate repairs” at Rudd’s, contingent on the city agreeing not to condemn any more mobile homes at Rudd’s. The offer also would hinge on Mr. Soffee providing residents a three-year lease fixed at the current rental rate that also gives residents the right to terminate their lease with 30 days notice.

Mr. Soffee also declined that offer. He said he has not asked the coalition for assistance, and he believes they have undermined some of the Rudd’s residents’ confidence in him.

He said he has paid to bring nearly 100 electrical pedestals outside of mobile homes up to code since the inspections began last year and is working to keep the park functioning with his limited resources.

He said the park was “thriving” and “children were always outside playing” before the city inspections began. He wistfully recalls residents marching through the trailer park in December 2013 hold- ing candles and thanking God they had a place to live.

“Now, this place looks like something out of a horror movie,” Mr. Soffee said. “People have broken into the empty trailers and stolen everything out of them that they could. Broken glass and other debris are everywhere.”

“We’re going to do all we can to help those residents,” Mr. Storey vowed.

He said the city inspections at Mobile Towne this month “put scores more families at risk of displacement.”

The city issuing more safety violations at another mobile home park while Rudd’s residents continue to struggle “is very unhelpful,” he added.