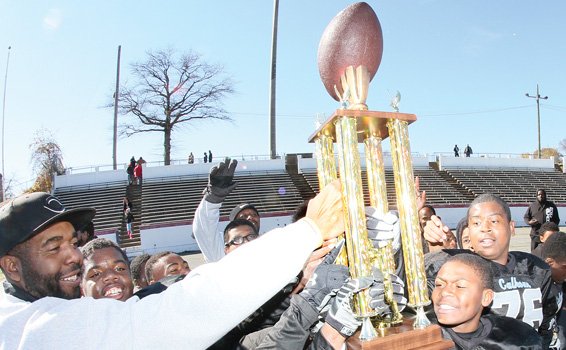 Above, the Calhoun Cougars raise their trophy at the Junior Division of Richmond Parks and Recreation Center Youth Football Tournament. Photo by Sandra Sellars

The Calhoun Cougars are the champions of tackle football in Richmond’s Recreation Center League for the first time in at least 20 years.

The Cougars, led by head coach LaMar Dixon and his staff, showed their mettle in a momentous goal line stand during the final two minutes of play at City Stadium.

Led by defensive standout Lavar Allen Jr., the Cougars stopped the Ravens four times at the 2-yard line. Even Lamar Davis, Reid’s star running back, could not get over the goal line. On the final play, the Cougars surged forward and halted a Ravens rush through the center of the line as the clock expired.

In the first half, the Cougars’ Curtis Jackson, who won MVP honors, and the Ravens’ Mark Leisure scored touchdowns.

The Cougars surged to what appeared to be an insurmountable lead in the second half. Fullback Barata Clanton bulled past the goal line for one score, and Cougars quarterback Damian Harris threw a spiral to his brother, Jae-shawn Harris, who ran in what proved to be the winning touchdown.

But missed extra points opened the door for Reid. With less than six minutes to go, Davis scored to pull the Ravens within six points. Then after halting the Cougars, Reid took over for a final drive to tie or win, aided by big gains from Davis. But with the Calhoun cheerleaders urging them on, the defense rose to the occasion to secure the unexpected Cougars victory.

The win was huge for Calhoun, who had lost to Reid 21-0 during the regular season. The Cougars came into the playoffs rated long shots as the seventh seed in the tournament.

The win also crowned the efforts of sports program manager Roderick Johnson to rebuild a once flagging youth athletic program based out of the Calhoun Center.

In the other title games, the T.B. Smith Seahawks proved too much for the Mosby Spartans in the Midgets’ title game for 11- and 12-year-olds. The top team in the division, the Seahawks won 34-0 to finish undefeated and become champions for the second straight year.

The Reid Ravens won the PeeWee division for 9- and 10-year-olds with a 12-0 victory over the Blackwell Bandits. The Ravens also went 9-0 for the season.

In the JV PeeWee or flag football division for 7- and 8-year-olds, the Hotchkiss Eagles prevailed 6-0 over the Battery Park Vikings.