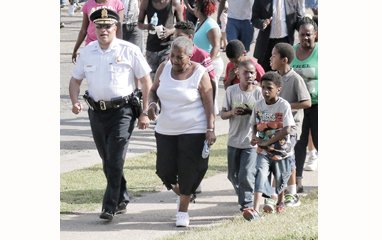 Richmond Police Chief Alfred Durham works at strengthening community ties by attending community meetings and leading anti-violence rallies, including this one May 12 in the Mosby Court public housing community. Photo by Sandra Sellars

It was not the kind of day he had hoped for or envisioned.

The result: Two men died — one in a South Side shooting, another by stabbing in the West End — and three others were injured, one critically.

It was one of the bloodiest days since Chief Durham became Richmond’s top cop Feb. 20.

The day capped an especially brutal weekend of violence in Richmond that began May 29, when a man was shot and killed on South Side. Another man was wounded May 30 in a shooting after an argument broke out among a group of people at Hotchkiss Field on North Side.

Police are investigating the two shooting deaths last weekend as homicides. They are the 10th and 11th so far in 2015. The stabbing death is classified by Richmond Police as a death investigation or as Gene Lepley, a police spokesperson, explained, “a sudden, unexplained death that has no strong evidence that a homicide has occurred.”

Chief Durham discussed those incidents and others, crime trends and crime-fighting strategies at a press conference Monday in front of the John Marshall Courts Building in Downtown.

“I’m really saddened about the violence that occurred over the weekend,” he told reporters.

Despite the uptick in violence over the weekend, the chief reported Richmond has reported “11 homicides, compared to 19 at this time frame last year.” Five of the homicides have been solved.

In an effort to strengthen community ties, the chief has attended more than 30 community meetings, forums and events and held community forums known as “Peeps and Police.”

He attributed the overall declines in violent crime to effective community policing by his officers and improved cooperation from the community in identifying criminal activities and gun-toting criminals.

“I have been so impressed with the relationships with the community and our officers,” he said.

He added, “We’re headed in the right direction. There are still folks with weapons who think that’s the way to solve issues. We cannot continue to have these folks come into the community and wreak havoc and take other’s lives.”

To that end, Chief Durham said Richmond Police would kick off its annual summer crime-fighting strategy known as the “Fugitives and Firearms Initiative” Wednesday, June 3, to “track down folks with illegal firearms.”

In summers past, dozens of illegal guns have been taken off the streets annually through the initiative.

“I want this to be a safe and happy summer for all in this city,” Chief Durham said.

He also announced that the Richmond Commonwealth’s Attorney’s Office has notified him it will not criminally charge Officer Stacy Rogers for shooting a man during a foot pursuit in April outside a hotel on Midlothian Turnpike.

The incident began when Officer Rogers approached Roderick D. Hardy of Dinwiddie County in front of a room at the hotel. Wearing a police uniform, he identified himself as an officer and asked to speak with Mr. Hardy, who then began running, according to police.

The Commonwealth’s Attorney’s Office has confirmed Officer Rogers’ account that Mr. Hardy pulled a gun during the pursuit and pointed it at the officer after the fleeing man fell to the ground. Officer Andre Guevara also was involved in the chase.

Officer Rogers fired a single shot that struck Mr. Hardy in the chest. He was taken to the hospital, treated and now is being held in the Richmond Justice Center awaiting trial on charges of assault on a law enforcement officer, possession of a firearm by a felon and brandishing a firearm. His gun was recovered immediately following the incident.

Chief Durham praised the Richmond community for letting the investigation take its course and said Officer Rogers is back on the job. He was placed on administrative leave with pay pending the results of the investigation.