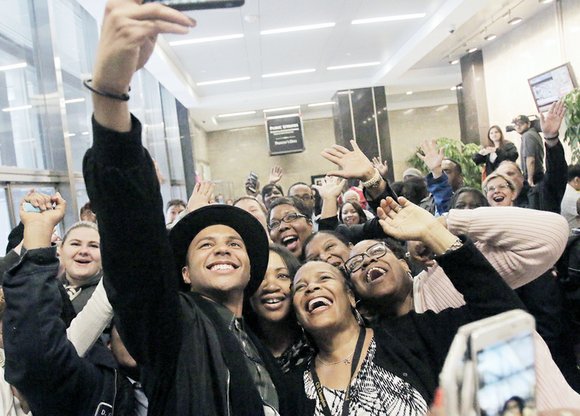 “American Idol” finalist Rayvon Owen of Henrico takes a selfie with jubilant fans at Richmond City Hall before performing before a crowd at the James Center in Downtown last Friday. Photo by Sandra Sellars

When the limousine carrying Rayvon and his mother, Patrice Fitzgerald, pulled up to the James Center in Downtown last Friday, about 1,000 cheering fans were waiting for him in the rain.

Rayvon, who attended the Center for the Arts at Henrico High School and sang in the Richmond Boys Choir, returned home to a hero’s welcome after earning a spot in the Top 4 in the popular “American Idol” nationally televised singing competition. It is broadcast locally on Fox’s WRLH-TV Channel 35 in the Richmond area.

While he was eliminated Wednesday night, he elicited cheers from audience members in the California studio and brought a positive spotlight to Richmond.

“He has made our city and our region so very proud,” Richmond Mayor Dwight C. Jones told the cheering audience of fans of all ages gathered for his homecoming celebration — from adoring teens to joyous office workers, including a Chesterfield County mom who presented Rayvon with a box of Krispy Kreme doughnuts.

Rayvon was joined by 2006 “American Idol” finalist Elliott Yamin of Richmond, who congratulated him with a big bear hug.

The mayor called Rayvon “a positive role model” for young people from the area.

Ready to sing, Rayvon took the microphone and bellowed, “What’s up Richmond!” to roars of delight from the audience.

He was overwhelmed by the outpouring of support.

The Idol smash then sang three songs, including “Believe,” a tune he had performed for the “American Idol” judges and dedicated to his mother.

Jacinta Reed was among the lively crowd. She said she worked with Rayvon’s mother at SunTrust Bank for several years before his mother left the company. She said they have exchanged text messages throughout the competition.

“He’s a very sweet and kind person, the exact same person you see on TV,” she said.

Edith Harris and several other members of Antioch Baptist Church in Eastern Henrico County, where Rayvon formerly sang in the youth choir, turned out to support the family. 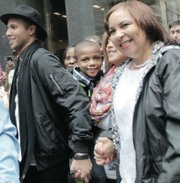 “American Idol” star Rayvon Owen walks through a sea of fans in Downtown with his biggest cheerleader — his mother, Patrice Fitzgerald.

“We’re just behind him 100 percent,” Ms. Harris said after hugging Ms. Fitzgerald, a former Antioch member. “We’re all keeping him in our prayers and wishing him the best.”

“When I saw all his posters around school, I said, ‘I want to be like him some day,’ ” said Joshua Bynum, a Henrico High sophomore, who said he will enter the Center for the Arts during the next school year.

During his daylong whirlwind visit home, Rayvon also visited City Hall, attended a pep rally in his honor at Henrico High and sang at Friday Cheers, before heading back to Hollywood.

The 23-year-old singer and three other finalists — who also were feted in hometown celebrations last week — competed in a live broadcast Wednesday night for the right to advance to next week’s finale. But Rayvon was cut after the votes from the fans were tallied.

Fan support had kept Rayvon in the competition, particularly when he finished in the bottom of the four previous Idol broadcasts.

Still, Rayvon has earned a spot to tour nationally this summer with the Top 5 “American Idol” finishers. The tour is scheduled to come to Richmond on Tuesday, July 21, with a 7:30 p.m. show at the Carpenter Theatre at Richmond CenterStage in Downtown. Tickets range from $49 to $59 and are scheduled to go on sale at 10 a.m. Friday, May 8.

“It’s been so exciting, phenomenal. We appreciate everyone’s support and prayers,” Ms. Fitzgerald told the Free Press this week before departing Tuesday on a flight to Hollywood, Calif., where she was in the audience for Wednesday’s show.

Of her son’s Houdini-like escapes from elimination, Ms. Fitzgerald said, “The times he’s been at the bottom, you’re on pins and needles. But we walk by faith and not by sight.”

She said her son carries a Bible verse in his wallet — Jeremiah, chapter 29, verse 11 — “For I know the plans I have for you, declares the Lord, plans to prosper you and not to harm you, plans to give you hope and a future.”