VUU homecoming victory sets up fight against the Bulldogs 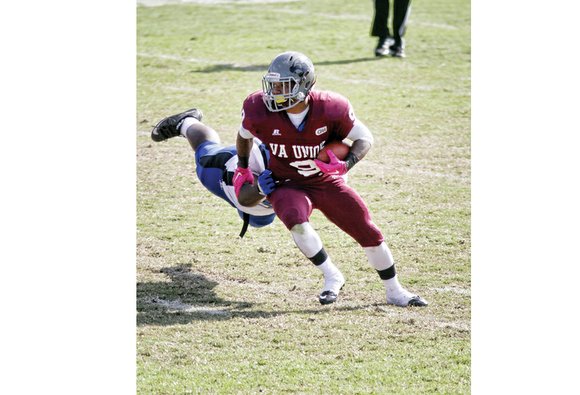 Virginia Union University has become both the irresistible force and the immovable object of CIAA football.

Under second-year Coach Mark James, the Panthers have showcased the league’s most powerful offense — 422 yards per game — and also the stiffest defense, with a scant 149 average yield.

That dream combination has VUU in the pole position for a spirited dash down the CIAA Northern Division homestretch.

After treating students, fans and alumni to a 33-14 homecoming whipping of Chowan University on Oct. 17, the Panthers will travel to Bowie State University on Saturday for a 1 p.m. kickoff that likely will determine just how high the ceiling may be this season.

Bowie State and VUU are both 2-0 in the Northern Division with three games to go.

Before a festive homecoming crowd of 8,214 last weekend on Lombardy Street, VUU was clicking on all cylinders against a Chowan outfit that took down Winston-Salem State University earlier this fall.

“It was a great atmosphere,” said Coach James.

On the ground, VUU rushed for 271 yards while Chowan went backward for minus five.

VUU leads the CIAA and the NCAA Division II in total defense and defense versus the run.

VUU excels at both running the ball and stuffing the run.

“Last season, we were too dependent on the pass,” said Coach James. “This year, we’ve become more balanced.”

Running behind an NFL-sized line, Hakeem Holland had 164 yards and two touchdowns.

Holland, the “Baltimore Bullet,” streaked 79 yards to the end zone on VUU’s first play in the second half, and the rout was on. The explosive Holland averages 7.5 yards per carry for the season.

Two weeks ago, Miano was CIAA Defensive Lineman of the Week for his efforts at Lincoln University.

Against Chowan University, he was even more dominant, recording 12 tackles, including an eye-popping 6.5 tackles behind the line of scrimmage. The native of Cameroon also forced two fumbles.

“Paulin is the most improved player on the team,” said Coach James. “He can be a serious force.”

VUU is 6-1 overall this season and 13-4 since Coach James came aboard a season ago.

All the team’s goals remain on the table.

The Panthers are very much in contention for the Northern Division title and a trip to the CIAA championship game Nov. 14 in Durham, N.C. Also, the NCAA Division II playoffs seem attainable at this juncture.

So much hinges on the outcome Saturday at Bowie State. The Bulldogs are without star quarterback Matt Coggans, who ruled ineligible after five games.

However, Bowie State has defeated Chowan and Virginia State University without Coggans while piling up impressive statistics in the air.

“Our next game is always our most important game,” said Coach James. “But I would be remiss not to say this game may change the course of our direction.”

Bowie State’s only loss on the field was Sept. 19 to Central Connecticut State University, a member of the NCAA Football Championship Subdivision — one step up from Division II.