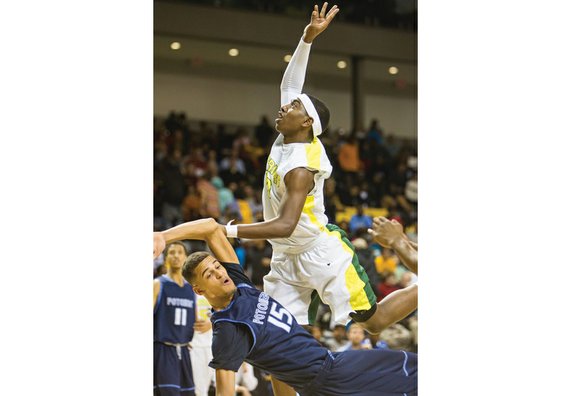 It’s about time for De’Monte Buckingham to be entered into the discussion of the Richmond area’s all-time, high school basketball greats.

At least since the 1970s, few players have piled up more points — and more championships — than the Henrico High School megastar.

With Buckingham the leading light, the Warriors have become basketball royalty under Coach Vance Harmon.

• Since Buckingham’s arrival on the Azalea Avenue campus in 2012, the Warriors are 90-10 entering this week and have won 38 of the last 39 games over two seasons.

• The Warriors, ranked No. 1 in the area this winter, started 10-0 after trouncing No. 2 St. Christopher’s 87-74 in the final of the Henrico Holiday Tournament. The Warriors’ average winning margin has been 26 points.

• Coach Harmon’s squad is vying for something no local public school has ever accomplished — winning three State crowns in four years.

• He entered this week with a career 1,649 points, including 249 this season in 10 outings. He is likely to play another 20 games, possibly worth another 500 points.

• He is closing in on the Henrico County record of 1,717 points set, coincidentally, by Coach Harmon himself as a student at Douglas Freeman High School in the late 1980s.

“I certainly hope he gets it,” Coach Harmon said. “In fact, I can’t think of a scenario where he won’t.”

“Buck is like the Swiss Army knife — he does so much,” said Coach Harmon.

The 205-pounder can play any position but is likely to be a small forward or shooting guard at his college destination, University of Richmond.

“Buck has a college-ready body now,” Coach Harmon said. “Physically, he’s a horse. And he has polished his shooting. He’s at 80 percent from the foul line and 35 percent from beyond the arc. He should have no trouble moving to the perimeter.”

Another older brother, Nicholas Buckingham, is a track sprinter at VCU.

The case for ranking Buckingham with the all-time greats is based on a combination of team and individual marks. Only a handful of public school ballers have ever topped 2,000 points. They include Tyrese Rice (2,328 points for L.C. Bird High), Tyree Evans (2,251 points for George Wythe High), Kendrick Warren (2,134 points for Thomas Jefferson High) and Travis McKie (2,094 points for John Marshall High).