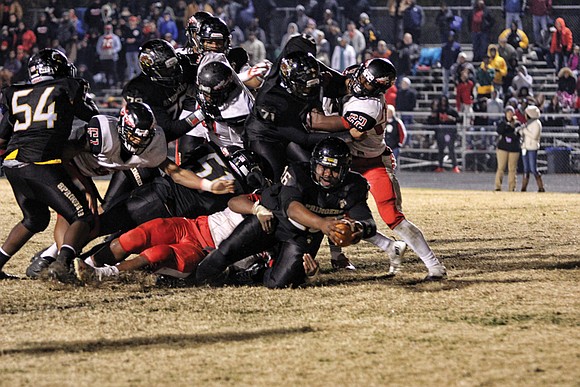 With 2:28 left on the clock, Highland Springs High School freshman Dre’Shawn Taylor stretches the ball across the goal line to give the Springers a 28-18 victory last Saturday over Nansemond River High School of Suffolk in the state 5A semifinals. The Springers will play Tuscarora High School of Leesburg on Saturday, Dec. 9, for the state title. Joseph Miles

Highland Springs High School is on the cusp of achieving something seldom done in state football history.

Football Coach Loren Johnson’s Springers are one victory from a “three-peat” of the state 5A Virginia High School League title.

The Springers, with a 13-1 record, haven’t lost since a 14-9 setback to Hermitage High School in the first game of the season on Aug. 25. The Springers avenged the loss with a 24-14 win over Hermitage High in the 5A South Region finals.

Highland Springs advanced to the state final after a 28-18 triumph last week at home against Nansemond River High School of Suffolk.

Tuscarora High is 12-2 after beating Stafford Senior High School outside of Fredericksburg 20-17 in the other state semifinal game.

The Springers are on a three-year roll with a dazzling record of 42-3.

Coach Johnson, who has coached the Highland Springs team since 2008, is navigating his talented teenagers into rare air. Since the start of VHSL record keeping in 1920, just a handful of schools have become “three-peaters” in the Class AAA division, which was split into Class 6 and Class 5 in 2013.

The Springers won their first state title (AAA) in 1961 under Coach Al Rinaldi, when the champ was determined by a vote of Associated Press sports writers.