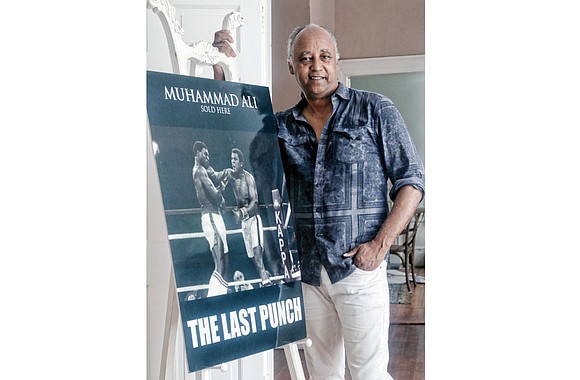 Richmond native and director Jesse Vaughan, who has won 28 Emmy Awards for his work, displays the poster from his latest project, “The Last Punch,” which will premiere Tuesday, Feb. 28, at the Byrd Theater in Carytown as part of the Richmond International Film Festival. Sandra Sellars/Richmond Free Press

“The Last Punch,” a feature film by Emmy Award-winning director and Richmond native Jesse Vaughan, will open the Richmond International Film Festival at 7 p.m. Tuesday, Feb. 28, at the Byrd Theater in Carytown.

Muhammad Ali’s life story has been told through more than a dozen documentaries and films, but this film tells the late boxing champion’s story from a different perspective, Mr. Vaughan said.

The point of view is not the only unique element of the film.

“This film offers an insider’s view of the fight (promotion) game,” Mr. Vaughan said. “And we get to look at Muhammad Ali on a more human level as we record what he went through at the end of his career.”

Mr. Vaughan said he expects the film to be released later this year.

“The Last Punch” is among scores of cutting-edge films and musical groups that will be featured at this year’s Richmond International Festival that runs through March 5 at venues across the city.

Mr. Vaughan will conduct a workshop for aspiring directors from 5 to 6:30 p.m. before the film’s premiere.

Mr. Vaughan has won 28 Emmy Awards for his work.

“Making movies is like painting a picture on the screen through the directing lighting, wardrobe, makeup and hair,” he said. “It is a beautiful medium because it encompasses all aspects of art.”

He said even with a career spanning more than 30 years, he continues to learn. “The Last Punch” was no different, he said.

“Going inside the intricacies of Muhammad Ali’s life helped me realize that heroism is not always a result of what you accomplish in life, but how you respond to adversity in a positive way,” he said.

“The film is ultimately about perseverance and overcoming obstacles, and we all have to do that in life. But the question is how do we respond to obstacles that contribute to our self-growth?”

Details on the festival and tickets: www.rvafilmfestival.com.