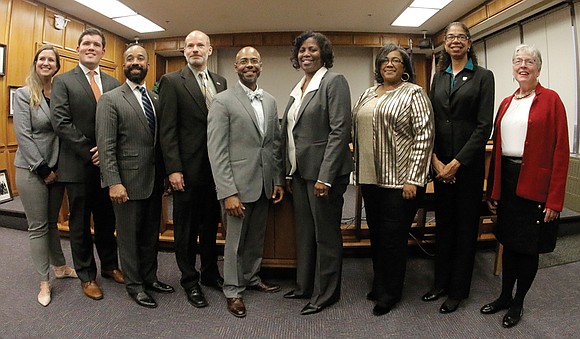 The nine members of the Richmond School Board were sworn in Tuesday, with newly installed Mayor Levar Stoney addressing the members.

“My favorite part of the oath, the same oath I gave just days ago, is ‘… according to the best of my ability, so help me God,’” Mayor Stoney said.

And for the nearly 24,000 schoolchildren attending Richmond Public Schools, the abilities of the new School Board best be superhuman.

Jeff M. Bourne, who won re-election on Nov. 8, is the board’s only incumbent.

During Tuesday’s initial meeting, he stepped down as board chairman, perhaps scaling back his responsibilities in preparation for a bid for the Virginia House of Delegates.

Mr. Bourne, a deputy attorney general, has said he may seek the 71st District House seat should Delegate Jennifer McClellan win a special election Tuesday, Jan. 10, for the state Senate.

With the new School Board facing significant budget challenges in 2017, including money for teacher salaries and retention and infrastructure needs to fix the city’s crumbling school buildings, the board chose Ms. Page, a corrections department workforce specialist who served on the School Board from 2010 to 2012, as its new chair.

The vote was unanimous.

The board also selected Dr. Sapini, a podiatrist, as vice chairman.

Although the School Board was scheduled to jump into a review of the superintendent’s 2017-2018 estimate of needs by RPS Chief Financial Officer T. David Myers, most of the two-hour meeting was used to review the timetable for submitting a budget to Mayor Stoney and the Richmond City Council for approval.

“The sooner we get something to the City, the more realistic we can be about what our starting points are,” said Superintendent Dana T. Bedden, who moderated the discussion around how much time will be needed for the new board to dissect his $303 million budget request and prepare a budget package for approval.

The board will conduct a three-hour, budget work session next Monday, Jan. 9, in preparation for a public hearing on the budget Tuesday, Jan. 17.

An online community survey about RPS is open for public feedback until Jan. 17 at www.rvaschools.net.

The board is slated to approve a budget and submit it to the mayor by Jan. 23.

Given the level of discussion and seeming confusion around the timeline, School Board members asked for more time before deciding on a budget timeline.

In response, board members now must submit their questions and requests for more information on Dr. Bedden’s budget proposal by noon on Thursday, Jan. 5.

“There’s a large portion of the budget in the superintendent’s statement of needs that is already committed or promised,” said Ms. Doerr.

One of those commitments is teacher salary decompression, a long-term strategy to increase pay for teachers and to attract more teachers by offering competitive salaries, something that both Ms. Doerr and Mr. Barlow campaigned for during their bid for election to the School Board in November.

“I think it will be up to us to make some tough decisions,” said Ms. Doerr.

“We’ve divided the entire budget into every single line item to look at and scrub through and make sure that we identify all opportunities to share resources, and to make sure that all of our budget line items are tied to priorities we want to see for RPS,” Ms. Doerr told the Free Press on Tuesday night.

Dr. Bedden’s $303 million budget plan is $22.7 million more ­— an 8.1 percent increase — than the current operating budget. That includes $9.6 million to make good on unfunded programs from fiscal years 2016 and 2017, $4.9 million for a 4.1 percent salary increase for teachers and $4.4 million for retirement, life and health insurance benefits.

Former School Board members Kimberly Gray, 2nd District, and Kristen Larson, 4th District, were elected to Richmond City Council in November and were sworn in to their new positions on Tuesday evening.

“I am unashamed to tell you, those were two of the hardest working members we had on the School Board,” said outgoing School Board vice chair Donald Coleman, 7th District.

“They have full knowledge of what we need up here. And that’s going to be exciting because the reality is that I don’t think any of us have really honestly faced the fact that there really is only one pot of money,” he continued.

Several School Board members have expressed hope that Ms. Gray and Ms. Larson, in their new positions, can help direct more money to the city schools.

RPS has a student population that is 70 percent African-American, with 92 percent of the city’s students considered economically disadvantaged by the Virginia Board of Education.

In other action, the School Board approved a cooperative resolution with City Council that will allow the board to hold meetings in the City Council chamber instead of its current meeting room that holds only about 60 people.