Flying Squirrels, other San Fran affiliates, have few or no African-American players 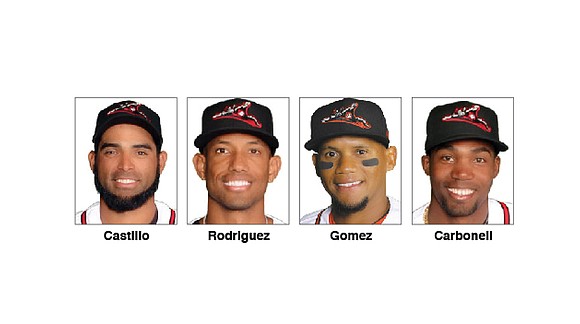 While baseball has become overwhelmingly white in the United States, it remains popular among aspiring hitters and pitchers of color from the Caribbean and South America.

Aside from Squirrels manager Willie Harris, there are no African-Americans on Richmond’s roster heading into this week’s action.

However, Harris’ lineup is filled with talented Latinos. Top performers have been infielder Ali Castillo from Venezuela, and left fielder Luigi Rodriguez and infielder Miguel Gómez, both from the Dominican Republic.

Cuban outfielder Daniel Carbonell has speed and power and remains a prospect.

The remainder of the local roster is all white.

This trend is consistent throughout the San Francisco Giants organization.

Just two African-Americans are on the San Francisco roster — outfielders Andrew McCutchen and Austin Jackson, both of whom were acquired via trades this season. The Giants’ roster also includes six Latinos.

At the Giants’ Triple A club, the Sacramento River Cats, one peg above Richmond, there are no African-Americans and seven Latinos.

On opening day rosters counting the disabled list, only 7.8 percent (a total of 68) of big leaguers were African-American, up from 7.1 percent a year go.

Major markets were no exception.

The New York Mets opened with no African-Americans; the Los Angeles Dodgers opened with just one, 33-year-old outfielder Matt Kemp.

While African-American numbers are paltry, international participation is about 28 percent, with most of the players from Caribbean islands and Venezuela.

Since 2012, there have been 41 African-Americans selected in the first round of the MLB draft. History indicates first round picks are on the fast track to “The Show.”

Meanwhile, pro baseball rosters will be top heavy with a blend of native-born Caucasians, mostly with college backgrounds, and Latinos, often signed at ages 16 and 17.