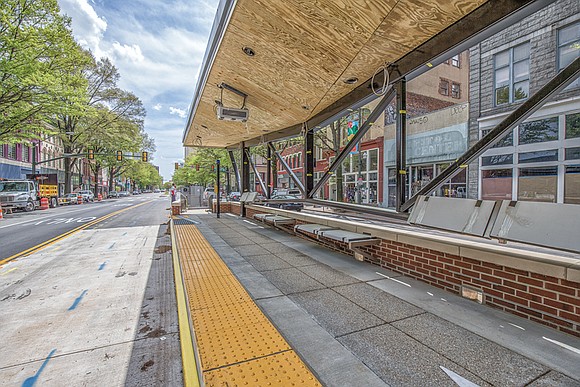 This Pulse station located Downtown on Broad Street is one of 14 stations along the 7.6-mile route between Rocketts Landing and The Shops at Willow Lawn. James Haskins/Richmond Free Press

That’s the day GRTC will launch the biggest overhaul of bus service in generations, one the company hopes that regular riders will cheer and that will bring new people to use public transit.

At 5 a.m. that day, the bus rapid transit Pulse service is scheduled to start taking passengers on the 7.6-mile route between The Shops at Willow Lawn to the west and Rocketts Landing to the east.

The start will be a big relief for businesses and motorists who have navigated through nearly two years of construction.

Pulse will run daily every 10 minutes during rush hour and every 15 minutes at other times through 1 a.m. on the east-west route that largely follows Broad Street.

Dubbed the Richmond Transit Network Plan, the overhaul means most buses will no longer stop at the 9th Street transfer center on weekdays and Saturdays between 5 a.m. and 7 p.m., but will make direct runs between points.

After 7 p.m. on most days and on Sundays, buses will stop at the transit center when service will be pared down, Ms. Pace said.

Still, the changes overall are expected to result in “faster, more consistent, more direct and more reliable service,” she said.

GRTC also hopes that people will start noticing newer, quieter buses are running the routes as the transit company shifts from diesel to compressed natural gas. Three of four buses are now running on CNG.

Along with revamping routes, GRTC also will end a detour that has moved buses off Broad Street and put them on Grace and Franklin streets in Downtown.

The overhaul also will mean stepped up weekday service to the Richmond International Airport, with runs every 30 minutes. There also will be improved service to other parts of Henrico County, Ms. Pace said, although recently approved expansion of service to Short Pump will not happen until later this year.

New bus signs and bus stops also will be activated.

GRTC obtained a grant to cover the cost, Ms. Pace said. The money will become available as soon as Richmond City Council gives the green light to use the money to cover the cost of the free rides. That is expected to happen in late May or early June.

The $64 million Pulse is another project that began during the tenure of former Mayor Dwight C. Jones.

“One quarter of the city’s population and two-thirds of all jobs in Richmond are within a half mile of the Pulse,” current Mayor Levar M. Stoney said.

He hopes Pulse, along with revamped bus service, will raise the profile of public transit and make it more than just a service for people who cannot afford cars.

Ahead of the launch, the project builder, Lane Construction, will be finishing landscaping and installing signs at the Pulse stations. Final road work also needs to be completed, including installation of pedestrian curb ramps and sidewalk repairs.

GRTC, meanwhile, will be conducting tests of the new system through May.

Ms. Pace said drivers and cyclists are getting used to the Pulse lanes on the street. She urged people to stay out of the lanes as part of adjusting to the change.

However, drivers will be allowed to make right turns from Pulse’s curbside lanes in Downtown, and cyclists also can use the curbside bus-only lanes after a Pulse bus has passed.