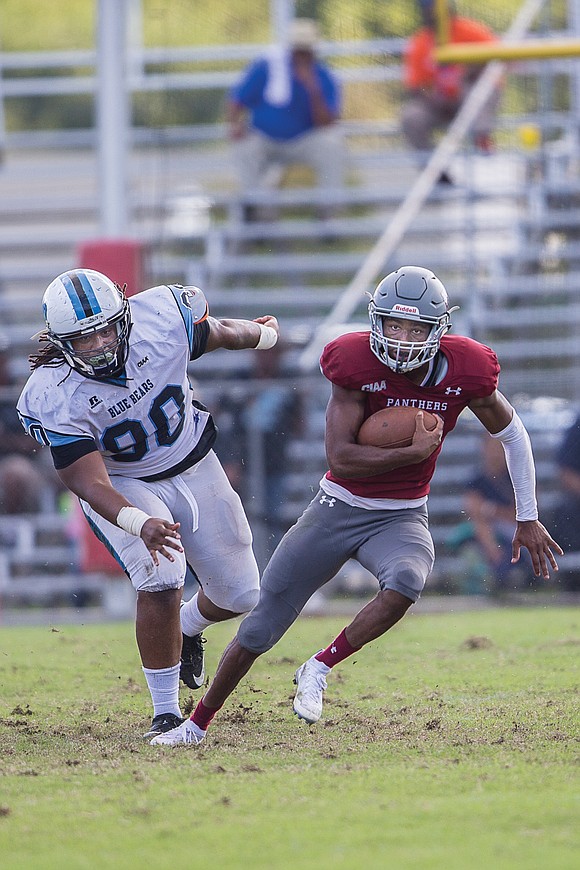 Darius Taylor’s initials are “D.T.” but “T.D.” might be more apropos.

Two of his six-point strikes went to freshman Kewann Calloway, an exciting newcomer from Florida. Calloway had four receptions overall for 91 yards in what amounted to his VUU coming-out party.

Taylor wasn’t picking on a weakling, either. Livingstone came into the game with back-to-back shutout victories.

VUU’s “other” Taylor was center ring, too.

Sophomore Tabyus Taylor, the CIAA’s leading rusher, ran for 52 yards on 19 carries and caught five passes for another 55 yards.

It will be homecoming on VUU’s Lombardy Street campus and chances are good that alumni will have smiles on their faces.

The Panthers are a solid bet to at least match their season scoring average of 36 points against a struggling Lincoln defense.

Calloway, nicknamed “Dooby,” is a 5-foot-9, 160-pound playmaker who arrives with sparkling credentials. Playing both offense and defense at Fort Lauderdale High School, he made first-team All-Broward County and second team 7A All-State in Florida.

Games against Bowie State and then against Virginia State University in the Nov. 3 season finale may determine whether VUU will be playing in the CIAA championship game Nov. 10 in Salem.