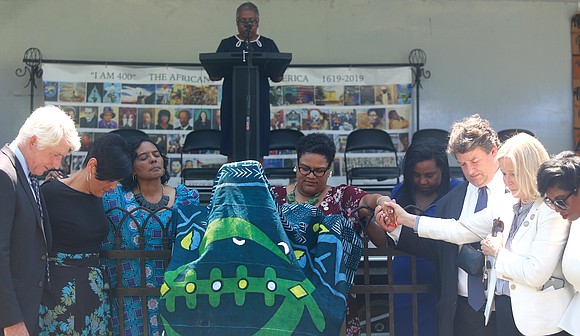 Members of the Virginia Legislative Black Caucus gathered Tuesday morning at the site of the former Lumpkin’s Jail in Shockoe Bottom, where enslaved people were bought and sold, to commemorate the 400th anniversary of Africans arriving in Virginia in 1619.

The legislators and a crowd of about 100 people recognized the journey made by African- Americans, while also boycotting President Trump’s visit to Jamestown and the racist attitudes that underscore the distance that still needs to be crossed in a divided America.

The commemoration followed a ceremony inside the State Capitol where about 14 African- American and white state legislators placed a wreath under plaques inscribed with the names of the first African-Americans to be elected to the Virginia General Assembly after the Civil War and the emancipation of America’s slave population.

“It is now time for us to re-energize,” said Richmond Delegate Delores L. McQuinn, who coordinated the VLBC events. “Stand for justice, stand for freedom and stand for what is right!”

The VLBC quickly put the events together as an alternative to the 400th anniversary commemoration of the first meeting of the Virginia General Assembly in Jamestown in 1619 after learning President Trump would serve as the keynote speaker at the event in Jamestown.

The president had been invited to Jamestown by Gov. Ralph S. Northam, a Democrat; the Republican leaders of the General Assembly, Sen. Majority Leader Tommy Norment of James City County and House Speaker Kirk Cox of Colonial Heights; and the board of American Evolution, which is organizing the 1619 commemoration events.

The invitation was not rescinded in spite of President Trump’s abysmal record on race, which in recent weeks includes racist attacks against members of Congress, public figures and communities of color in the lead-in to the anniversary.

The invitation also came at a time when federal agencies such as ICE and Customs and Border Patrol continue to arrest and detain immigrants seeking asylum in the United States, separating families and holding men, women and children in inhumane conditions.

Referring to President Trump as “the tenant in the White House,” Delegate McQuinn expressed to the crowd at the Lumpkin’s Jail site her sadness at how “the oxygen in the state of Virginia was being sucked out” with the president dominating the focus of the commemoration. She urged those present to be proactive in the fight for “the soul and the fabric of this country.”

“Righteous indignation always has a place, and this is the place and this certainly is the time,” Delegate McQuinn said.

Earlier this week, Delegate McQuinn criticized the American Evolution board, on which she serves as a member, in not consulting all members before unilaterally deciding to invite President Trump. She said she plans to discuss the issue with board leadership following a period of reflection, but is unsure if she will remain a board member.

Last week, Richmond Mayor Levar M. Stoney resigned from the board, saying he would not participate in the Jamestown event. Instead, he was among about 16 speakers at the two-hour event. Others included Congressman A. Donald McEachin of Henrico, Richmond City Council President Cynthia I. Newbille and several members of the Richmond General Assembly delegation along with House Minority Leader Eileen Filler-Corn of Northern Virginia. Virginia Attorney General Mark Herring was in the crowd.

With the length of the program in the summer heat, two people were stricken and had to be taken from the event by ambulance. Nonetheless, the event clearly struck a chord with area residents.

Jay Allen of Chesterfield, president of the Phi Phi Chapter of Omega Psi Phi Fraternity, was humbled by the occasion and the presence of “not just the heritage of me personally, but the heritage of all African-Americans in the United States.”

“We’ve improved in so many ways, but we have so many things that we can make better,” Mr. Allen said.

Central Montessori School teacher Kevin Comly came to the commemoration with fellow teacher Hannah Clayman and a student to “witness the support and make an expression” by placing flowers next to the information placards marking the site of the slave jail.

“We were looking forward to seeing what kind of support we could witness,” Mr. Comly said as the sound of traditional African music filled the air. “I don’t know if it’s the amount of people or if it’s the drums, but it feels like a powerful moment.”

“Today, sons and daughters of enslaved Africans stand united, not bound by shackles, but bound by common cause,” Mayor Stoney told the gathering. “We are recognizing not only America’s sin, but also the experiment that lives on today: Democracy.”

Virginia Republicans were critical of the Democratic legislators’ boycott of the Jamestown event, with House Speaker Cox accusing Democrats of “playing politics.”

“This is bigger than politics,” said state Sen. Jennifer L McClellan in a brief interview after the wreath-laying ceremony. She stressed the importance of “how we respond to the words and actions of this president and what he has unleashed among his supporters.”

“We have to speak up and stand up,” she said.

The commemoration also was organized in collaboration with the Richmond Slave Trail Commission, which is launching the second installment of its exhibit, “Unbound 2019: Truth and Reconciliation,” on Sunday, Aug. 4, at the Main Street Station Gallery, 1500 E. Main St. Members of the VLBC are expected to participate to continue the alternative commemoration.

“Today is not just a one shot day,” said Delegate Lamont Bagby of Henrico, referencing the long road taken by African- American legislators throughout the to ensure that the 400-year legacy of Virginia’s African-Americans isn’t forgotten. He noted that some have been lost to history and may never be fully given their due.