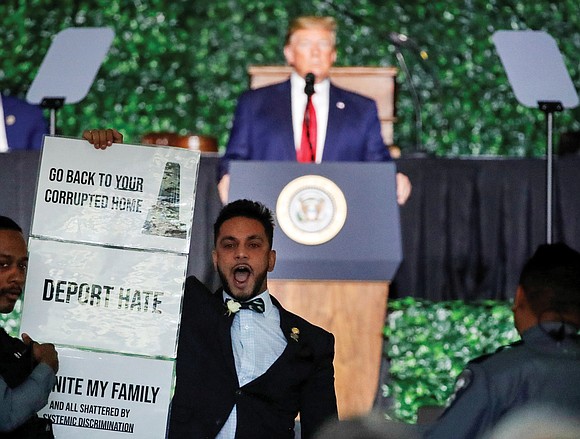 President Trump marked the 400th anniversary of American democracy Tuesday, but Virginia’s African-American lawmakers boycotted his celebration of the initial experiment in self-government in this country to protest his continued disparagement of a veteran black congressman and the majority-black Baltimore district he represents.

The positive rhetoric from President Trump marking the beginnings of representative government here 400 years ago contrasted sharply with his stream of attacks against U.S. Rep. Elijah Cummings of Maryland before and after the event.

The president said in remarks to members of Virginia’s General Assembly and other dignitaries that the United States has had many achievements, but “none exceeds the triumph that we are here to celebrate today.”

“Self-government in Virginia did not just give us a state we love — in a very true sense, it gave us the country we love, the United States of America,” he said.

The General Assembly grew out of a gathering that convened in July 1619 as the House of Burgesses. In 1867, after the Civil War, the legislature was dissolved for two years by an act of Congress. That enabled black men to join in writing a new state constitution recognizing for the first time their citizenship and their right to vote and serve in the legislature, which resumed operations in 1869.

But as President Trump addressed the lawmakers and others in a tent on the lawn of a history museum near the site of the original Jamestown colony, members of Virginia’s Legislative Black Caucus held an emotional ceremony about 60 miles away in Richmond, at the site of a once-notorious slave jail, where they took turns condemning the president.

Richmond Delegate Delores L. McQuinn, who refused to use President Trump’s name and instead called him “the tenant in the White House,” choked back tears as she said his critiques of minor- ity members of Congress were aimed at “every person of color in the United States of America.” She urged the gathering of about 100 people to “reclaim the soul and fabric of this country.”

Ahead of his speech, President Trump claimed the boycotting black lawmakers were going “against their own people.”

The president said black Americans “love the job” he’s doing and are “happy as hell” with his criticisms of Rep. Cummings, as well as his earlier attacks on four progressive Democratic female members of Congress, despite polls showing fewer than one in 10 African-Americans support him.

As President Trump spoke in Virginia, where in 1619 the first enslaved Africans also arrived in English North America, a congressional delegation led by House Speaker Nancy Pelosi visited the Door of No Return in Ghana, the departure point for millions of Africans shipped to the Americas and sold into slavery.

In his speech, President Trump offered a nod to the beginning of slavery in the United States by noting the arrival of the slaves in 1619 at Point Comfort near modern Hampton.

“We remember every sacred soul who suffered the horrors of slavery and the anguish of bondage,” he said.

President Trump’s speech was briefly interrupted by state Delegate Ibraheem Samirah, a Democrat from Fairfax and a Muslim, who stood silently holding laminated signs that read “Deport Hate,” “Reunite My Family” and “Go Back to Your Corrupted Home.”

Delegate Samirah said later he did it to protest the president’s policies and rhetoric.

“The man is unfit for office and unfit to partake in a celebration of democracy, representation and our nation’s history of immigrants,” the Palestinian-American said.

Republican House Speaker Kirk Cox, who introduced the president, called the protest “inconsistent with common decency and a violation of the rules of the House.”

At a ceremony in Jamestown earlier Tuesday, Gov. Ralph S. Northam — a Democrat whose political career was almost destroyed this year by a scandal over his wearing blackface decades ago — reflected on the complexities of the 1619 milestones.

The governor, who left the event before President Trump began speaking, noted that while the ideals of freedom and representative government flourished in Jamestown four centuries ago, enslaved Africans arrived just weeks later.

“So today, as we hold these commemorations of the first representative assembly in the free world, we have to remember who it included, and who it did not,” Gov. Northam said. “That’s the paradox of Virginia, of America and of our representative democracy.”