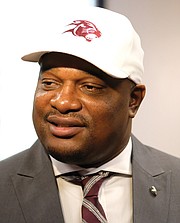 The Lady Panthers also have gone to the NCAA Tournament four straight years under Coach Gilbert.

In other VUU news, football Coach Alvin Parker has been elected president of the CIAA Football Coaches.

Coach Parker was voted into the position at the CIAA Media Day on July 17 in Salem.