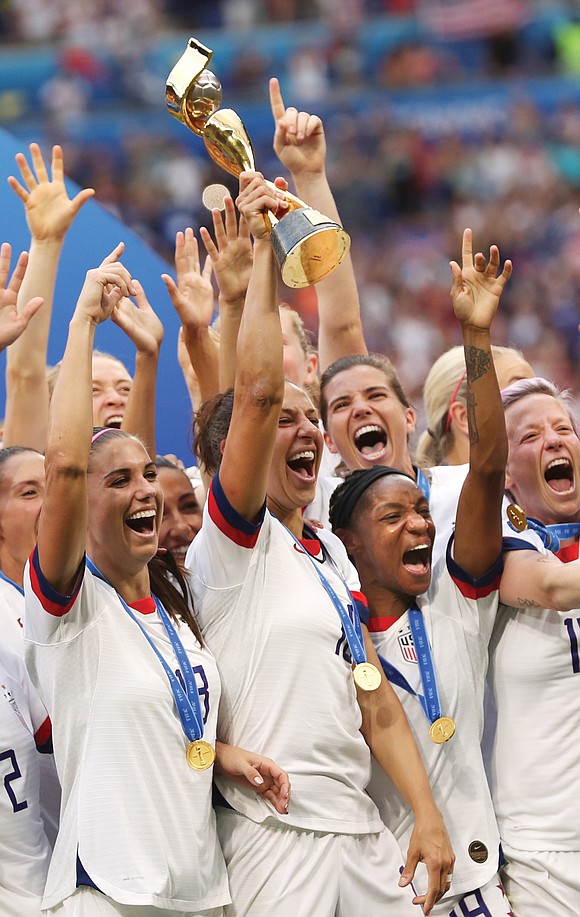 Crystal Dunn, center right, celebrates with teammates on being the world’s No. 1 after last Sunday’s 2-0 victory over The Netherlands at the FIFA Women’s World Cup in Lyon, France. Francisco Seco/Associated Press

The quick, savvy left back was like a 5-foot-1 human obstacle course on defense in helping the U.S. Women’s National Team win the FIFA Women’s World Cup last Sunday in Lyon, France.

It was the team’s second consecutive World Cup title for the American team and their fourth overall.

Wherever the ball was headed, opponents had to slip past Dunn. And that was like trying to sneak a T-bone past a hungry wolf.

The Americans allowed only two goals in elimination victories over France (2-1) and England (2-1) before defeating the team from The Netherlands 2-0 in the final.

The U.S. champions were feted Wednesday in a ticker tape parade in New York City.

Throughout two weeks of competition in the FIFA World Cup, Dunn was effective shadowing the other side’s top right-side striker, often the biggest threat.

It marked a dramatic shift in roles.

Dunn had been a prolific scorer at the University of North Carolina and in the pro ranks with the National Women’s Soccer League before switching positions to better serve Uncle Sam.

“Yes, I have multiple identities,” she told the French media. “I think of myself as a footballer — just trying to impact the game from a different angle on the field.”

Dunn had 14 goals in 2013 for UNC, earning the accolade of ACC Offensive Player of the Year. She had 15 goals in 21 games in 2015 for the Carolina Courage, winning the National Women’s Soccer League MVP honors.

Across the Atlantic at the World Cup, she was content letting teammates Alex Morgan and Megan Rapinoe do the scoring while she helped shut the door at the other end.

Dunn is the squad’s shortest player and among the few who are married. She tied the knot last year with native Frenchman Pierre Soubrier, a former trainer with the WNSL Washington Spirit.

Coincidentally, the U.S. team faced host France in the knockout round quarterfinals with Soubrier and other family members in attendance.

“My in-laws, they’re French, and they want their side to do well,” Dunn told the media after the U.S victory.

“But, obviously, I’m part of the family now and they’re rooting for and want me to go all the way.”

And before a worldwide audience, she showed the “D” in Dunn stands for Defense.

After the game, the Lyon stadium was filled with fans’ chants calling for equal pay, demonstrating a compelling reminder that the record-setting team continues to be the epicenter of the ongoing battle for fair treatment.

The prize money for this year’s Women’s World Cup is $30 million, while the 2018 Men’s World Cup prize totaled $400 million. The U.S. men’s team did not qualify for the last World Cup tournament.

The U.S. women’s team filed a pay discrimination lawsuit on March 8 against the U.S. Soccer Federation. In the lawsuit, the team outlined that if they played and won 20 exhibition games in a year, “female players would earn a maximum of $99,000 or $4,950 per game, while similarly situated male players would earn an average of $263,320 or $13,166 per game.”

Before the World Cup games began, the players and the soccer federation agreed to mediation.