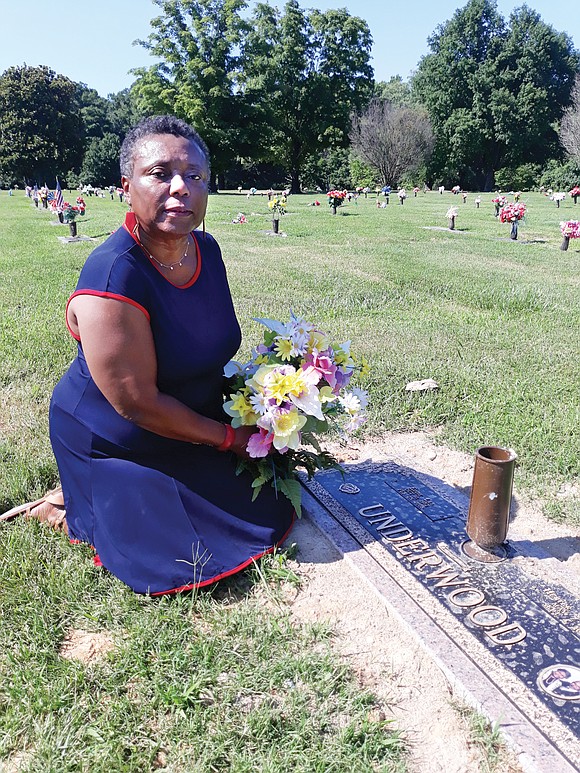 Adeline U. Clarke kneels beside the recently installed marker at her parents’ gravesite in Forest Lawn Cemetery in Henrico County. She finished paying for the marker in November, but had to badger the cemetery for months before it was installed. Jeremy Lazarus

Adeline U. Clarke finally has the elaborate marker she paid to have installed at her parents’ graves in Forest Lawn Cemetery in Henrico County.

The Richmond area resident had to fight for nearly eight months to get the private cemetery to order and place the granite marker edged with bronze at the gravesite where her parents, Eddie Lee and Hester Stevenson Underwood, are buried.

She finished paying in November for the marker that includes her parents’ names, their birth and death dates and a photo of the couple who were married 59 years. Ms. Clarke said she initially was told the marker would take six weeks, although she said she later learned that the marker could be produced and installed within two weeks.

Ms. Clarke said she was thankful she kept the receipts for the marker because the cemetery staff finally admitted her paperwork had been lost. After filling out a second set, she said nothing happened. A second threat to go to the media finally pushed the cemetery to act, she said. “It’s been stressful,” said Ms. Clarke, a retiree from Richmond Public Schools and the Communities in Schools program.

She only hopes that others do not face the same problem. But that could be a forlorn hope as the 97-year-old cemetery continues to collect complaints ranging from missing markers to gravesites that are unprepared for burials.

The cemetery has not responded to a request for comment on the reported problems that involve payments of thousands of dollars for services that have not been provided. That

includes a complaint from another Richmond area resident, Kimberly Hughes-Whitfield, who is still waiting for the cemetery to produce and install a marker at the grave of her late husband, Rufus Junior “DJ-X” Whitfield. Mrs. Hughes-Whitfield finished paying for the marker in January, but the promised marker has yet to be installed, she said.

“Having everything finished and complete would be closure for me,” she said, “but I can’t get any answers about the delay.”

Missing markers are not the only problem. Ms. Clarke said she received an email from a woman who alleged that the cemetery put her “cousin’s son in the wrong mausoleum. I don’t know what has happened with the management there.”

Last year, the children of a Dinwiddie man reported that Forest Lawn Cemetery took their money for a graveside funeral, but failed to prepare the site for the service for Robert Brooks Sr. The cemetery failed to set up a canopy, chairs and the device for lowering the casket, they said. The grave also had not been dug deep enough, the family said, and after the service, the family had to watch tractors dig more dirt out of the grave before lowering the casket.

“This is not what is supposed to happen,” said Mark Brooks, one of the late man’s sons.