Farewell to a friend 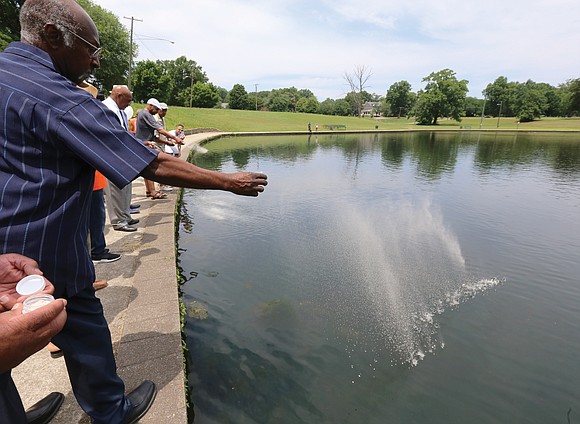 Greg Roland and other comrades of George Edward “Buster” Booth scatter his ashes May 29 in Byrd Park’s Swan Lake in a final farewell to a lifelong friend.

James “Plunky” Branch, one of the close-knit group that grew up together in Richmond’s Randolph and Maymont neighborhoods, plays “Amazing Grace” on his saxophone ahead of the ash-scattering ceremony.

A small memorial includes Mr. Booth’s obituary and photo. Former NBA star Bobby Dandridge and the Rev. Robert Winfree, who preached Mr. Booth’s eulogy, are among those who attended the ceremony that began at Byrd Park’s Shelter No. 1, one of Mr. Booth’s favorite places. Every year around Mr. Booth’s May 26 birthday, his friends would bring the longtime paraplegic to the shelter for an outing. Mr. Booth died Nov. 6, 2018, but friends waited to scatter his ashes near what would have been his 72nd birthday. Longtime friend Jerome F. Hughes, who helped organize the ceremony, said Swan Lake was chosen because as children, they were banned from what was then a whites-only place to swim. 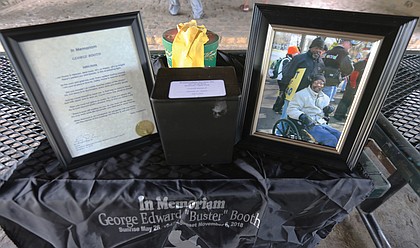