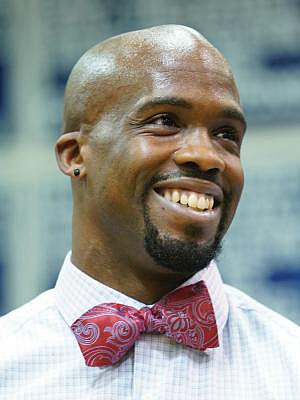 Ryan Sykes, an assistant principal at Carter G. Woodson Middle School in Hopewell, was surprised with the $25,000 Milken Educator Award during an assembly Nov. 6 at the school.

Mr. Sykes, a former math teacher, is the only educator in Virginia to win the award, which recognizes public school educators who promote excellence and innovation. Under his leadership, student achievement in mathematics at Woodson Middle School has improved for two years straight.

“When they called my named, I wondered if there was another Ryan Sykes here. Is this a joke?” Mr. Sykes said as the auditorium roared with cheers.“Those of you that know me and where I am from ... these things (the award) don’t happen.”

In a statement released after the award, Dr. Candice McQueen, chief executive officer of the National Institute for Excellence in Teaching, said, “Ryan Sykes has a passion for making Carter G. Woodson Middle School a place where every student can thrive. We are proud to welcome him as a Milken Educator.”

Mr. Sykes, 31, earned his bachelor’s and master’s degrees from Virginia State University and is currently working on a doctorate in administration and supervision.

He began his career in education in 2011 as a student-teacher at Woodson Middle and Harry E. James Elementary School in Hopewell as a mathematics special education inclusion teacher. After a year at Indian River Middle School in his hometown of Chesapeake, Mr. Sykes returned to Woodson.

In 2016-2017, he served as dean of students with Richmond Public Schools, but returned to Hopewell Public Schools as an assistant principal.

He is Hopewell’s first Milken Educator Award winner. He said he plans to share the $25,000 award with his wife and 2-year-old son and possibly take a family vacation.

The Milken Family Foundation has distributed more than $70 million in awards to more than 2,800 educators across the country, including more than $1.1 million in Virginia. The awards are called the “Oscars of education.”

In March, Mr. Sykes will attend the Milken Educator Forum in Indianapolis, where he will have the opportunity to network with other award winners and exchange ideas with state and federal leaders on the future of education.