Yankees then and now: Team could field lineup of color in World Series

The New York Yankees are a diverse bunch fueled by numerous African-American and Latino players.

However, before the arrival of Elston Howard in 1955, the storied franchise was as white as the ball.

First, the current situation: The Yankees started the week 92-50 in first place in the American League East. 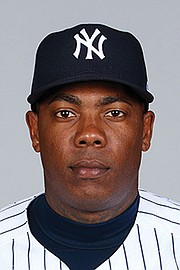 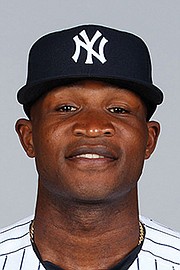 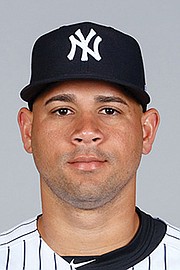 Notsurprisingly, The Pinstripes are pushing toward what could be a record 28th World Series title.

Furthermore, slugger Giancarlo Stanton and pitchers Dellin Betances and Luis Serverino are on the mend following injuries and may join the team soon.

Diversity, however, was slow to arrive in the Big Apple’s northernmost borough. The team’s complexion didn’t change until April 1955 when Elston “Ellie” Howard became the first African-American Yankee. The St. Louis native broke the color barrier at Yankee Stadium eight full seasons after Jackie Robinson debuted across town in Brooklyn, N.Y., in 1947.

Despite the success of Robinson and other black players with the Brooklyn Dodgers, and the arrival of the great Willie Mays with the New York Giants, the Yankees’ management seemed to look the other way in scouting talent.

At the time Howard made his big league debut, he was the lone African-American in the entire Yankees organization.

The inclusion of Howard came after years of protests outside Yankee Stadium and media pressure.

Howard was a powerful hitter and versatile defender, capable of playing catcher, first base or the outfield.

However, Yankees manager Casey Stengel, who was born in 1890 in Kansas City, nicknamed Howard “Eight ball,” synonymous with black, and called him that to his face and in front of the media. It was the elderly Stengel’s poor attempt at comedy and never affected how the manager treated Howard on the field. Despite the racial nickname, Stengel selected Howard to nine straight All-Star teams from 1957 to 1965, and sometimes batted him cleanup in the Yankees’ order.

There were racial problems and complications, however. Howard and his wife stayed in separate hotels from the other Yankees at spring training in St. Petersburg, Fla., and at some of the Southern cities where the team played.

On the field, Howard proved he belonged and then some. After some early heckling from racists in the crowds, he emerged as a fan favorite and among the most respected Yankees on and off the diamond. 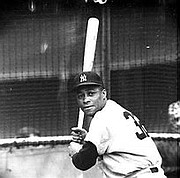 Powerful with the bat and versatile in the field, Howard became the American League’s first African-American MVP in 1963.

During Howard’s career with the Yankees from 1955 to 1967, he played with only a handful of other African-American athletes.

It’s far different now for the Yankees. The makeup of the team closely reflects that of the surrounding Bronx.

Through games of Sept. 7, German is among big league leaders in victories with 17.

Chapman, “the Cuban missile,” leads the league with 36 saves. Through 142 games, the Yankees had blasted 264 home runs and are on track to notch a record 41st AL pennant.

Manager Aaron Boone conceivably could start an all-minority lineup in the World Series.

That’s a sharp contrast to years before Howard changed minds and thrilled fans at Yankee Stadium.

Very few African-Americans ever suited up for the Richmond Virginians, the New York Yankees’ top farm club from 1956 to 1964.

From 1964 to 1966, the Yankees’ AA farm club was in Columbus, Ga. That team, called the Columbus Confederate Yankees, wore uniforms bearing the Confederate flag.