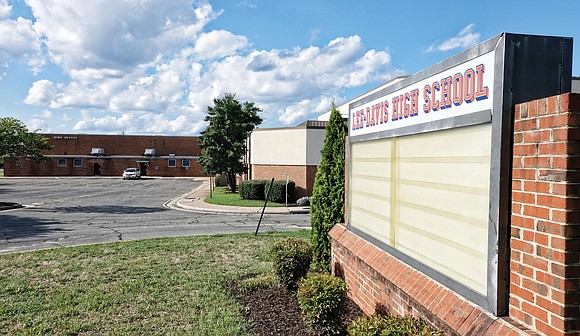 Hanover Branch NAACP officials claim the county school Board bowed to pressure from the Hanover County Board of supervisors to re-install signs bearing the Confederate school names. this one, outside the high school, went back up on the marquee just days ago. Photo by Sandra Sellars

The Hanover County School Board has temporarily re-installed the signs of two Hanover schools named for Confederates, just weeks after voting to rename the schools and their mascots to eliminate ties to the Confederacy.

“Under the directive of the Hanover County School Board, school division staff will be temporarily re-installing the primary signage at Lee-Davis High School and Stonewall Jackson Middle School for a brief period of time while school division administration works through the transition process for renaming the schools,” the School Board said in a statement this week.

The signs were removed following a 4-3 vote on July 14 by the School Board to rename the schools.

The high school, opened in 1959 during Massive Resistance, was named for Confederate Gen. Robert E. Lee and Confederate President Jefferson Davis. The schools were segregated at the time; Black students could not attend.

The middle school, which was named for another Confederate general, was opened in 1969, just months after Hanover County submitted its school desegregation plan to the federal court.

The School Board’s close vote to change the names and eliminate the honor for racist traitors was viewed as a sea change in the county that is 86 percent white, 9.5 percent African-American and 3 percent Latino. It also garnered approval from a variety of sources, including the Hanover Branch NAACP, which had advocated for the change, and Gov. Ralph S. Northam, who called eliminating Confederate names “an important step” in ensuring a learning environment that reflects Virginia’s student body.

“Just as there is an ongoing process for determining the new names of these schools, the School Board is asking staff to present a formalized process for the removal of the current names that includes signage and various articles located throughout the schools and campuses.”

A small sign bearing the Confederate battle flag and the words “I Support Confederate Heritage” is posted on the Hanover high school’s marquee.

Robert N. Barnette Jr., president of the Hanover Branch NAACP and the state NAACP, slammed the Hanover School Board for backing away from its earlier decision. He claimed the board “apparently succumbed to pressure from the Hanover County Board of Supervisors, members of which have declared their intention to reverse the name change.”

“Re-installing the Confederate names at the schools just one month before the start of the school year reflects an ongoing hostility to African-American students and is antithetical to the values of morality and equality,” Mr. Barnette continued.

“We regret that the School Board has decided to waste additional taxpayer funds clinging to the past rather than helping students move forward.”

He said that the Hanover NAACP’s appeal in a federal lawsuit it filed last August seeking to change the schools’ names is moving forward. The suit had been dismissed in May.

Mr. Barnette said last month that the appeal would continue in case the Hanover County School Board dragged its feet on the name change.

Staff at the two schools are to present plans about the re-naming during the next School Board meeting on Tuesday, Aug. 11. The board is to vote on new names in October.